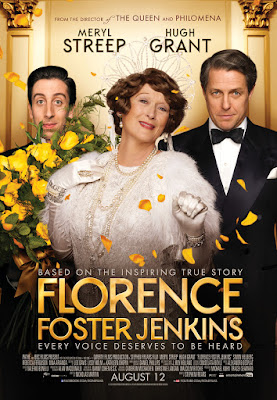 Synopsis: Directed by Stephen Frears (Philomena, The Queen), Florence Foster Jenkins tells the inspirational true story of the eponymous New York heiress who obsessively pursued her dream of becoming a great singer. The film celebrates the human spirit, the power of music and the passion of amateurs everywhere. The voice Florence (Streep) heard in her head was divine, but to the rest of the world it was hilariously awful. At private recitals, her devoted husband and manager, St Clair Bayfield (Grant), managed to protect Florence from the truth. But when Florence decided to give her first public concert at New York’s Carnegie Hall, St Clair realized he had perhaps bitten off more than he could chew.

Thanks to our friends at eOne Films, Cinemablographer has ten (10) double passes to sneak peeks of Florence Foster Jenkins in Calgary, Edmonton, Halifax, Ottawa, Toronto, Vancouver, Victoria, and Winnipeg! All you have to do to enter is answer the following question:

Meryl Streep previously showed off her pipes playing a singer in which of the following films?

a) Julie & Julia
b) The French Lieutenant's Woman
c) Kramer Vs. Kramer: The Musical
d) A Prairie Home Companion

Send your answer to contests@cinemablographer.com with the subject ‘Florence Foster Jenkins – [City]*.’
~Don’t forget to add your city!~

*Entries that do not include a city may be discarded.
**Limit one email entry per person/household per contest. Multiple entries will be deleted and marked as spam.
***Limit one win per person per month.
Posted by Pat Mullen at 8/05/2016 11:47:00 AM