Contest: Win Tickets to See 'Southside with You' in Toronto! 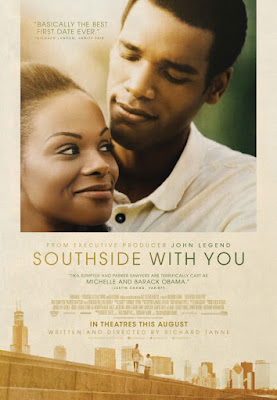 Before POTUS and FLOTUS there was Barack and Michelle. Experience the love story of the young Obamas in the acclaimed drama Southside with You. Southside with You opens in theatres on Friday, August 26 from eOne Films, but lucky readers in Toronto have a chance to attend a sneak peek. Answer the trivia below for your chance to win tickets!


Synopsis: Inspired by Barack and Michelle Obama’s first date, Southside with You recounts the eventful summer day in 1989 when a young law firm associate named Barack Obama (Parker Sawyers) tried to woo lawyer Michelle Robinson (Tika Sumpter) during a daylong date that took them from the Art Institute of Chicago to a screening of Spike Lee’s Do the Right Thing to the site of their first kiss outside of an ice cream parlor.

Thanks to eOne Films, Cinemablographer double passes to give away to the Toronto sneak peek of Southside with You! All you need to do to enter is answer the following question:

Southside with You recounts the romance of Barack and Michelle Obama. In what year did the Obamas get married?

Send your answer to contests@cinemablographer.com with the subject ‘Southside with You.’

Southside with You opens in theatres August 26 from eOne Films.

**Limit one email entry per person/household per contest. Multiple entries will be deleted and marked as spam.
***Limit one win per person per month.
Posted by Pat Mullen at 8/19/2016 04:24:00 PM