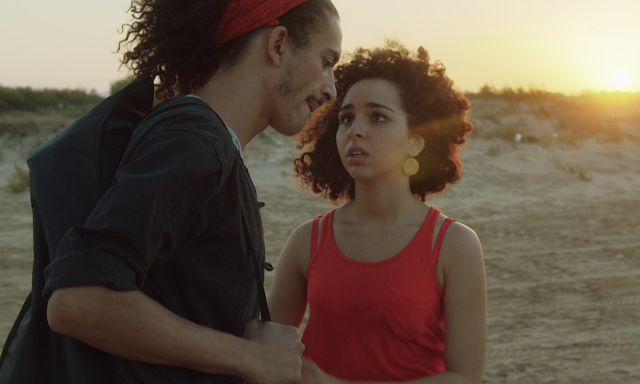 
There’s something in the air in the summer of 2010 as 18-year-old Farah (Baya Medhaffer) tries beer for the first time and anxiously awaits her future as a university student. The concern, see, is that Farah has a burning passion for music. She wishes to study musicology, but her mother (Ghalia Benali) envisions a life for the young woman as a doctor. Farah’s mother’s interest in seeing her daughter flourish offers a future for the young woman that many teens across the world would envy, but for this girl full of spirit and idealism, it’s a fate she does not accept.

What Farah wants to do is sing and she already nurtures her talent as part of a band with several Tunisians eager to rock the Kasbah. Their songs anticipate Tunisia’s Arab Spring movement as Farah fervently voices the angst of a generation. The group offers an anthem for Tunisia’s youth with the song “My Country,” which is an impassioned call for everyone to open their eyes and see clearly the world around them. Naturally, it’s a dangerous tune to sing and Farah’s instance on playing in the face of censorship and her mother’s wishes leads to terrifying consequences that reveal the oppressive society against which Tunisians revolted.

While As I Open My Eyes shows the oppressive elements of fundamentalist corners of the world, it also shows the fissures that enable change. Director/co-writer Leyla Bouzid, along with fellow screenwriter Sophie-Marie Champion, favour an optimistic view of the world in which citizens, particularly young Arab women, have the freedom to express themselves and choose the course of their lives without fear of reprisals, subjugation, or violence. Moreover, while the film offers a fair and realistic snapshot of a contemporary Muslim family, As I Open My Eyes stands out from many films to tackle similar topics in that Bouzid refuses to pit Farah’s father (Lassaad Jamoussi) as an Evil Oppressive Patriarch. He’s an absentee parent, yes, but he wants the best for his daughter and nurtures her dreams in spite of the social norms that Farah’s snoopy, backwards-looking neighbours exhibit.

As the more overbearing of the two parents, the devotion of Farah’s mother lets the film hit some quietly affective notes as the mother confronts her own internalisation of these values that oppress women. Bouzid develops the mother/daughter relationship intensely, and Benali’s unwaveringly strong performance as the mother offers a fine counterpoint to the remarkable passion of Medhaffer’s turn. Bouzid makes a cultural turning point of epic signification a microcosm of intimate scope as the personal becomes deeply political. The complex tempest of emotions between parent and child encapsulates the restlessness and hunger for change that exploded in 2010-2011. The small revolution in Farah’s household anticipates the greater movement to come. This subtle and moving portrait of the dawn of Arab Spring is one to which many eyes should open and admire.

As I Open My Eyes opens the 2nd African Film Festival of Ottawa on Friday, October 14, 2016, 7:00 pm at the River Building Theatre, Carleton University.

Also playing this weekend is Mahamat-Saleh Haroun’s powerful documentary Hissein Habré, a Chadian Tragedy. (Read a review of the film at POV!)