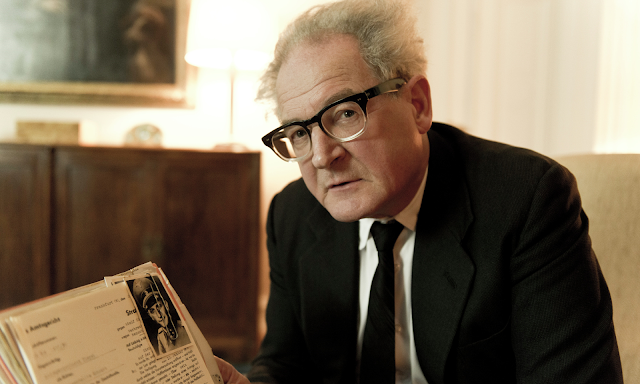 
In the vein of Margarethe Von Trotta’s Hannah Arendt, The People vs. Fritz Bauer unpacks the meaning behind the pursuit of justice for the Holocaust, rather than offer a mere historical account. Both dramas use the Eichmann trial as the roots of their inquiries—Arendt to consider the banality of evil and Bauer to hold accountable the officials who didn’t personally kill countless Jews, but orchestrated systemised mass murder—and The People vs. Fritz Bauer highlights a significant step towards Germany’s collective acknowledgement of its crimes. However, Bauer’s dogged hunt for guilty Nazis also blinds him to the contemporary ills that his office fails to address. The film reveals how one must find closure for the wrongs of the past while using it to learn in the present.

Bauer displays expert detective work and legal cunning as he leads his team in the search for Eichmann, whom they believe is hiding in Argentina, and knows how to use the law to his advantage (and a few illegal loopholes too!) to bring the fiend back to Berlin. However, his unhealthy fixation on Eichmann means that other cases and causes go neglected. For example, his trusty prosecutor Karl Angermann (Phoenix’s Ronald Zehrfeld) brings forward a case with the potential to take a stand for current human rights causes in post-WW2 Germany. Karl’s case deals with a gay man who faces extensive jail time for being caught soliciting an act of mutual masturbation. The junior prosecutor asks his mentor if they should appeal for leniency, but Bauer says they should seek the required term. Justice and mercy fail to go together for Bauer despite his motivation behind the Eichmann trial.

The Eichmann file advances with Bauer fearing traitors in his midst and fielding suspicious colleagues. The task of bringing Eichmann from Argentina puts Bauer at risk for charges of treason if German officials, many of whom are either Nazis or Holocaust deniers, discover his cooperation with Mossad to capture the criminal. Bauer’s a man accustomed to watching his back as the film introduces rumors of his own sexuality early on. His reluctance to agree with Karl adds an underlying element of irony. How can a man who survived the Holocaust seek to punish another man for who he is? His interest in Karl’s colourful socks, meanwhile, thickens the tension.

Klaußner gives an excellent performance as the tireless Bauer. He carries both the conviction and the weight of Bauer’s pursuit of justice, and the personal tolls of his secrets show in Klaußner’s complex turn. Zehrfeld is equally fine in a performance that opens up a sensitive side of his skills one doesn’t see in his roles in Christian Petzold’s recent films in which he plays shady cads. Both men shake a cocktail of passion, conviction, self-loathing, and self-censorship that echoes at a time when the likes of Donald Trump raise the [increasingly unlikely] possibility of a new Fuhrer taking the world a step back.

The People vs. Fritz Bauer unpacks a great deal of history while making the significance of the case resonate sharply on a personal level as Bauer and Karl navigate the contradictions of fighting for justice with denying a human rights case in the present. It’s a riveting procedural even though the outcome of the Eichmann case is well known, for the essential mysterious of Karl’s case and the risk of betrayal and exposure it brings, keeps the talky drama surprisingly suspenseful. Aided by a jazzy score and top-notch production values, this atmospheric film is old school drama with contemporary flavour. It’s a slice of history worth revisiting.

The People vs. Fritz Bauer opens in Toronto Oct. 21 at the CanadaSqaure.