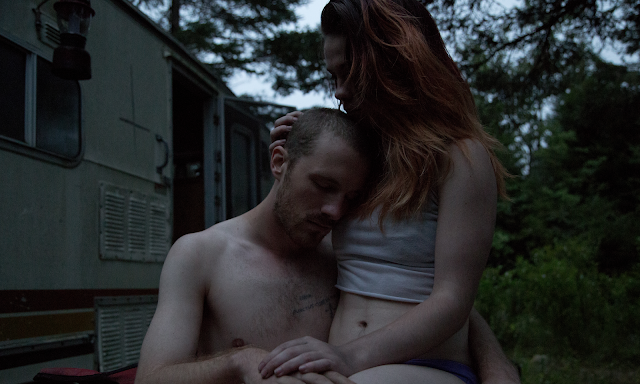 
The chief offenders here are the cinematography and the framing. McKenzie and DP Scott Moore make some bizarre—and frankly irritating—shot choices as they frame the story of Blaise (Andrew Gillis) and Nessa (Bhreagh MacNeil) and their struggles with Methadone within an odd assortment of off-kilter images. Werewolf offers a 78-minute conversation in which the film refuses to let the audience look it in the eye. Instead, Werewolf puts its focus on, say, a character’s ear or elbow, or a prop that might kinda/sorta have some function in the scene. It rarely works and the distancing effect proves needlessly alienating.

Werewolf goes for the junkie itch and almost scratches the restlessness of the couples’ recovery, but there really isn’t any coherent logic to the unbalanced imagery and style often makes the film hard to follow. (Which is a problem given that most scenes feature only two characters.) It’s unusually distracting for such a sparse production. The maplecore visuals don’t find any justice in the low-grade camera with which the team shoots Werewolf and the overly shaky camerawork is too self-conscious to complement the faux-verité style.

The film echoes indies about addiction and recovery like Debra Granik’s searing Down to the Bone with its raw style and challenging subject matter, yet Blaise and Nessa aren’t likely to endear themselves to viewers unless one gives them ample patience. Blaise spends so much time whining that an overdose would be welcome (if only to liven up the pace) and the couple’s effort to pay their rising Methadone bill by cutting grass around the ‘hood is a little too aimless for its own good. McKenzie nevertheless succeeds in crafting the characters’ plight with raw authenticity as they go door to door and turn off prospective customers with their sickly appearances and unprofessional pitches. One customer actually pays them to leave and one almost wants to contribute to the pot.

Fortunately, though, Werewolf finds redemption in Nessa as she listens to her mother and opts to save herself from the dumpster fire called Blaise. Werewolf tackles the co-dependency and the trap of convenience one falls into with such a such-destructive relationship. Nessa’s true poison is Blaise and quitting him is the hardest feat an addict like her can take. As Nessa, MacNeil’s withdrawn and disaffected performance creates a character so deprived of life that her spiritual malnourishment is evident from the opening frames. One only gets fleeting glimpses of MacNeil’s potential, though, whenever Werewolf looks past the actress’s elbow or ice cream cone and reminds the viewer that there’s actually a human somewhere in the frame.