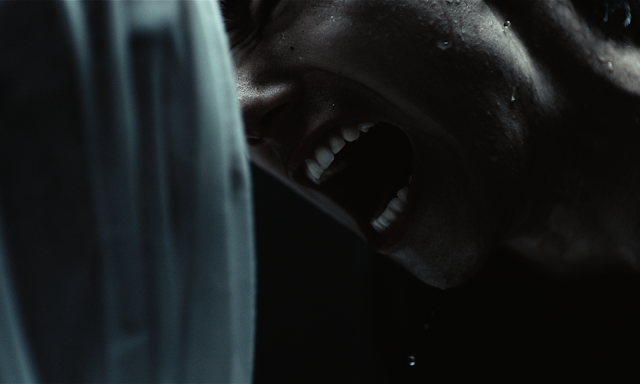 The film is a raw and unnerving study of grief and trauma as Toronto teen Hashi (newcomer Keigian Umi Tang) lives with survivor’s guilt following the suicide of his best friend. Hashi doesn’t cope with his pain well, nor does he seem to have any support or guidance on the home front, and he escapes his anguish through deviant behaviour. He does a little breaking and entering by tinkering with doorknobs and lockers, and he rifles through his classmates possessions, carefully pilfering small bills and non-essential items to avoid detection.

The loss of this friend haunts Hashi as brief and jarring images of the young girl appear around the school. She walks the campus like a watchful ghost and, as soon as she knows she has Hashi’s attention, she drops to her death. Images of teen suicide are never easy to watch no matter how often they repeat themselves, so The Lockpicker puts the audience in the discomfort of Hashi’s mind. He lives with inescapable pain.

Few outlets give him hope, but Hashi puts his feelings into words. He uses his habit for people-watching and perceiving to create short stories and cathartic letters. They’re dark passages, as the film reveals through voiceover readings and through the recordings of ideas and direct sound that Hashi takes around town. Similarly, the promise of a sailing class gives him an important goal for making it to the summer. All he must do is endure winter, and raise the cash to get out of Hogtown, and he’ll be on the road to recovery. The film is fair in its treatment of depression and despair in this regard, as self-imposed goals, like a mere trip a few months away, can easily save someone who feels as lost as Hashi does.

Tang carries the film with a striking debut performance, which is doubly impressive for a non-professional actor. Much of The Lockpicker tasks Tang with holding the film together through the power of a silent screen performance and he says a lot despite the scant dialogue. This interior performance lets Tang exploit Hashi’s habit of sitting quietly and sullenly: he’s an observer, withdrawn and suffering, and his detached character communicates his grief and his need to escape.

The Lockpicker confronts teen alienation on multiple levels, as the girl’s suicide is only one trauma with which Hashi struggles. When bullying grows day by day in the hallways and violence claims another close friend, the film realistically shows the complications with which teens grew up and evolve. However, the film also veers from realism in key moments to convey the complexity of grief and to give an impression of Hashi’s isolation.

The Lockpicker cleverly uses genre hybridity to its advantage as Okita offers some unique speculative interludes in which Hashi encounters his grief. These haunting images are fleeting, like the passing ghosts or a corpse hidden within the floors, but The Lockpicker is truly unnerving with its intense sound design. An industrial grind fuels moments of dread and anger, and The Lockpicker frighteningly puts the audience inside Hashi’s head as he grapples with his grief. It’s a scary place to be.

The Lockpicker opens in Toronto on June 22.