The film draws from the experiences of Michael German, a former FBI agent who spent considerable time undercover with white supremacists and right-wing extremists. Imperium illustrates how the ideal undercover agent isn’t necessarily a James Bond or Jason Bourne type, but rather an ordinary observer who is more brains than brawns. This characterisation draws out a truly unexpected performance from Daniel Radcliffe in the starring role of Nate Foster, a meek-looking FBI agent who seems as if he’d lose both a bare-knuckle brawl and a Scrabble match to Ben Whishaw’s Q. The petite Radcliffe doesn’t look like a Neo-Nazi, but he also doesn’t fit the profile for an undercover cop that stereotypical skinheads might imagine after seeing The Departed.

Imperium holds neither Nate nor his subjects to stereotypes. Sure, he encounters a few hotheaded machismo dudes, but most of the white supremacists in the group he infiltrates are a surprisingly cordial bunch. Foster gets a tip for the assignment when his colleague Angela (Toni Collette a sturdy gum-smacking presence) hears disturbing talk of a dirty bomb on a radio show hosted by an eloquent bigot named Dallas Wolf. Actor/playwright Tracy Letts, coming off an award-calibre turn as an anti-Semitic dean in Indignation, offers a white supremacist who jars expectations in the age of windbags like Donald Trump. Wolf, like Trump, is all talk, but he’s a surprisingly gentle man when he isn’t spewing racist crap into the airwaves. He lives with his mother. He avoids turning words into action. Rhetoric is his revolution.

The same goes for white supremacist and family man Gerry (Sam Trammell), whom Nate befriends while edging himself closer to the bomb and the lead conspirators for radical action. Gerry talks of cultural annihilation and the erasure of whiteness in between picnicky dinners on the deck with the wife, kids, and fellow skinheads. He’s the last person one expects to preach these scary things and plot these acts of terrorism.

Aside from one edgy march for white rights, which sees an eerie number of Heil Hitler salutes and a violent encounter between extremists and protestors, the film trains its focus on the actions that fail to generate headlines but tell the bigger story. Imperium builds a compelling and intense drama by humanising the deviants at its centre. These skinheads and white supremacists aren’t all the tattooed, beefed-up career criminals one expects them to be. They’re often family men and otherwise ordinary citizens. America’s racism is showing in the era of the Donald, but Imperium conveys that this percolating antagonism towards diversity and multiculturalism is a deeply rooted danger that persists because it is so invisible in our everyday life.

Radcliffe anchors the film with a focused and authoritative performance. Despite one’s initial hesitation to accept him in this role, Radcliffe’s Nate ultimately convinces because he, like his suspects, is fallible and human. Imperium highlights an undercover agent’s vulnerability just as much as it does his social skills and adaptability. Fear is painted all over Nate’s face in tense moments because he knows that a guy his size can’t outweigh the enemy if he blows his cover.

Director/writer Daniel Ragussis makes an impressive feature debut with Imperium by keeping the drama close to the characters and the humans at its centre. The film uses the humanity and uncomfortable likability of its characters who do and say repugnant things to open up a conversation about the circumstances that create such hateful people. As Nate approaches these people by listening to their grievances of perceived victimisation, Imperium builds a portrait of a deeply troubled American in search of some much-needed therapy. It’s an unsettlingly timely film to watch given the present election in the USA, and the eerie still photos and archival images that proliferate the film are distressing, but Imperium hits closest to home when it takes audiences through the front doors of its extremists to show perfectly average citizens and their comfortable, friendly lives. 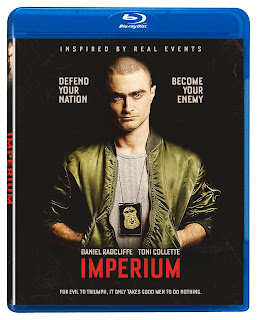 The disc: The 1080p HD transfer and 2.35:1 widescreen make Imperium ideal for home viewing. The film plays just fine on a laptop with its intimately character driven story, but performances this intense deserve a full home theatre screen.

Bonus features: Imperium features a director commentary with Ragussis and a triple-bill of featurettes. The three mini-docs include “The Making of Imperium,” cast and crew interviews, and “Living Undercover.” The three featurettes draw from the same pool of interviews and footage, so the making of feature is the most worthwhile of the three as it pulls together insightful clips from Radcliffe, Ragussis, Letts, Tremmell, and German. Viewers eager to understand the relationship between Radcliffe and his real-life inspiration might prefer the condensed “Living Undercover” doc, which plays Radcliffe’s observations on the character against German’s experiences as an undercover agent. Both features draw out Imperium’s ability to highlight the vulnerability of its hero and the humanity of its foes. Trailers for Hell or High Water and Miss Sloane, meanwhile, highlight good eats yet to come.

Imperium is now available on video on demand, Blu-ray, DVD, and digital HD from VVS Films.