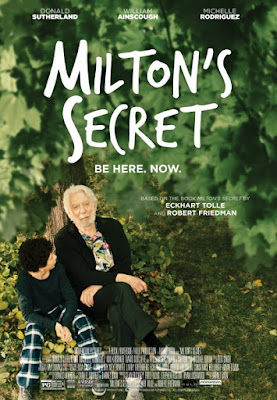 
Synopsis: Based on the book by #1 New York Times bestselling authors Eckhart Tolle and Robert Friedman, Milton’s Secret is a movie about family and the uncertain times families live in. Milton (William Ainscough) is a 12 year-old boy growing up in an economically and socially unpredictable world. His mother and father (Mia Kirshner, David Sutcliffe) are workaholics with marital and financial problems, and he is bullied at school. When his grandfather (Donald Sutherland) visits, Milton learns rehashing the past and worrying about the future are preventing him from finding true happiness

Thanks to eOne Films, Cinemablographer has one DVD of Milton’s Secret to give away.  All you need to do to enter is answer the following question:

Donald Sutherland recently starred as the villainous President Snow in the adaptations of which popular YA series?

Send your answer and full mailing address to contests@cinemablographer.com with the subject ‘Milton’s Secret.’

Milton’s Secret is now on DVD from eOne Films.

*Entries that do not include a mailing address will be discarded.
**Limit one email entry per person/household per contest. Multiple entries will be deleted and marked as spam.
***Limit one win per person per month.