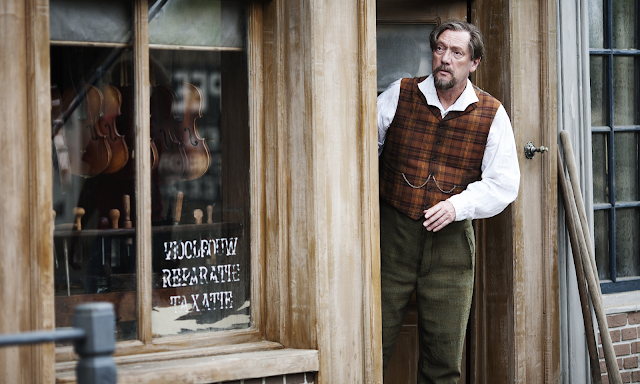 
The film takes audiences to Amsterdam in the year 1888. A shiny new central station has just opened to unite the country by rail, and properties near the swanky transportation hub are at a premium. Naturally, developers are swooping in and squeezing landowners out, but woodworker/violinmaker Vedder (Gijs Scholten van Aschat) opts to hold his ground. Vedder knows that the architects behind a proposed hotel for the city block on which his property sits is prime real estate, so he resists the charming offers by the junior architect, Ebert (Thomas Cammaert), who offers roughly half the price the land should fetch. Vedder, united with one lone tailor from the same commercial strip, takes a stand on principle.

Things get a bit complicated when A Noble Intention connects Vedder’s perseverance with the efforts of his cousin Anijs (Jacob Derwig), a pharmacist who means well by moonlighting as a doctor for the impoverished farmers working in the peat fields. The story jumps around a fair bit as A Noble Intention actually begins with a disturbing scene that highlights the plight and poverty of these farmers when some ruffians force themselves on a young woman (Joosje Duk) and make her father (Juda Goslinga) play the violin while they rape her. The jump in scenery from the outskirts of town to the budding metropolis of Amsterdam is akin to a jarring shift in time and space. While it seems as if A Noble Intention flashes forward as Vedder steps out of his violin shop, one eventually realises that Vedder is not actually the peat farmer despite their close physical resemblance and fondness for violins. They’re just kindred spirits, which comes into play later on, although the relationship between the stories is initially random.

The screenplay by Frank Ketelaar, adapted from a book by Thomas Rosenbloom, makes several confusing jumps as A Noble Intentions juggles storylines. The pacing frustrates and the focus blurs, but the strong thematic coherence holds the film together as the fates of all the characters converge in an ironic downfall. Vedder and Anijs mean well as they pool their resources with plans to exploit the poverty of the peat farmers and make a pretty penny while helping them all escape their misery, and A Noble Intention builds to a climax in which Vedder seems so jinxed by life that he could easily fuel a Coen Brothers’ comedy. The madness to which he succumbs is completely random, as is some of Anijs’s erratic behaviour, but the cruelty of his fate invites one to weigh his pride against his purpose.

When the end product is a bit of a mess, A Noble Intention boasts notably strong production values as impressive art direction and visual effects transform Amsterdam into a turn of the century hub on the cusp of change. The scope and detail of the production design are notable especially given since A Noble Intention is a single-origin affair, rather than a well-partnered international co-production, as the Dutch assemble a sturdy looking period piece.

Gijs Scholten van Aschat offers a strong performance as Vedder, a man driven by his convictions until his pride destroys him. One wishes that the script developed Vedder’s descent into madness more thoroughly, though, as his out-of-nowhere craziness, strange as it is, gives the film a healthy dose of tragedy as the actor’s intense physical performance makes the once noble man a victim of greed and corruption as the walls of the hotel box him in like walls in a cell. A Noble Intention, like the hotel that eventually engulfs Vedder’s little shop and home, is better in its construction than it is in its design. Good intentions, indeed.