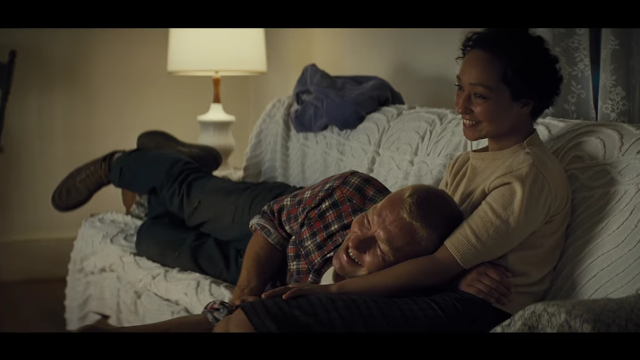 
Loving slowly (very slowly) and quietly (very quietly) situates the marriage of Richard and Mildred in a hostile environment that fails to recognise love even when it’s in plain sight. Nichols offers a few fleeting scenes of the Lovings drawing disapproving looks from members of the white and black communities alike in their old-fashioned Virginia town. After they cross the state lines to marry, their return home becomes a threat to society even though Richard and Mildred, both of whom are shy and modest people, simply want a quiet life in the home that Richard plans to build in the fields where Mildred grew up.

Loving uses a contrast between country living and rural life to convey the change in the Lovings relationship when they leave Virginia for Washington, DC where they may grow and raise a family. They stay with Mildred’s aunt in a modest home adorned by a two-foot strip of grass and a shabby excuse for a tree. From Mildred’s sad and very disapproving first glance at their new home, Loving shows that this life is not the one she imagines for her children. The streets are too busy for kids, while the grandparents, aunties, and uncles are too far away for the children to develop any sense of their roots and relations.

Nichols’ understated direction invests Loving with a strong sense of place, time, and character. His fondness for lingering shots captures the discomfort one feels in the different environments as well as the unspoken prejudice and racial divides that persist. The contrast between the urban space and rural life, however, highlights the sense that Virginia lives in a different era. The streets of Washington are tough and crowded, but they’re diverse and developing with the times. The film shows the divides between the communities as Richard smuggles Mildred across the state border during the dark of night so that his mother may deliver the first baby. The birth of a child should be a celebration, but the fellow citizens with whom they grew up disapprove of any mixed race kids running around the neighbourhood and eventually tip off the fuzz to the fugitives in the Loving household.

Mildred, a country girl at heart, raises their three kids in the cramped home back in Virginia and worries about the dangers of the city with its busy streets and lack of family ties. She becomes the driving force in appealing their case and drawing the attention of the American Civil Liberties Union (ACLU), which delivers unto them an earnest lawyer Bernie Cohen (Nick Kroll) who hopes to take their defense to the Supreme Court and see anti-miscegenation laws deemed unconstitutional.

Nichols rejects nearly every shred of biopic/”based on a true story” convention while chronicling the marriage of the Lovings and the case it inspired. Loving only enters the courtrooms when Richard and Mildred face their early charges, and then finally for a brief moment to address the Supreme Court. Nichols shows the audience how they grow a family despite living like fugitives. On one hand, their exile highlights the fundamental violation to their rights as the courts deem their love less pure or legitimate to any marriage between two whites, two blacks, or any two people be they red, green, or blue, etc.

The film instead focuses on the relationship between Richard and Mildred with uncontrived episodic glimpses into their everyday life. Nichols shows audiences a bond that is pure and natural. The silence between Richard and Mildred speaks to the normalcy of their relationship: they’re just two plain and ordinary people who love the comfort of sitting with the other in front of the TV and enjoying the companionship. Similarly, a wordless scene of the family sharing a meal at the kitchen table offers the emotional climax of the film instead of Cohen’s rousing speech on equality and civil liberties at the Supreme Court. Loving doesn’t preach at the audience and it doesn’t have to while making its case.

The performances by Edgerton and Negga are all the evidence one needs to see that the Lovings have a strong and healthy marriage. Both actors are quiet and reserved as they approach the characters with subtle humanity. Edgerton disappears into the film marvellously as Richard’s silence conveys his devotion for Mildred with nary a word. He’s the strong, silent type of a man who isn’t one for expressing his emotions, but his eyes convey a gentle and sensitive man who unreservedly loves his wife. Even when one character observes that Richard could escape this situation easily by getting a divorce, Edgerton just laughs it off with a shrug that conveys the absurdity of such an idea. Negga, similarly, finds Mildred’s power in her modesty. She shows that Mildred is a woman who has internalised the racial divides and learned to keep her head down and her mouth shut. Negga’s bashful and delicately soft-spoken performance slowly reveals Mildred’s fire as Loving progresses and surprises the audience with her courage and spirit.

There are times when Loving risks deifying the Lovings by showing Richard and Mildred without so much as a ruffle, but the quiet passion of the two lead performances keep the film entirely within mid-range. There are no moments of intense emotional outpouring and there are no big Hollywood feels. As a result, Loving is a film that one admires without absorbing or forging an immediate connection. Instead, Loving consistently reminds us that Richard and Mildred are simply human and it’s a refreshing sight to see.