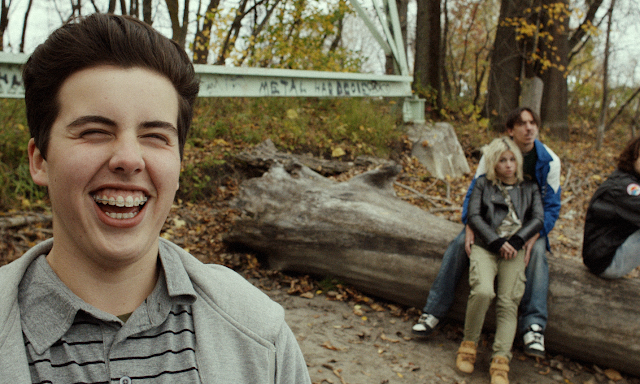 Jackass meets Philippe Falardeau in this coming of age satire set in the ho-hum suburbs of Quebec. The central figure of arrested development, and the butt of most of Prank’s jokes, is Stefi (Étienne Galloy). He’s mouth-breathing dweeb without any friends and fewer personable traits. This loner persona makes him ripe for the plucking in the games of pranksters Martin (Alexandre Lavigne), Lea (Constance Massicotte) and Jean-Se (Simon Pigeon). Stefi becomes a sort of fall man and straight guy in the gang’s viral videos: he’s often the one causing the diversion or escaping oncoming punches from the irate victims of the show.

Stefi enjoys the attention too as it gets him out of the house. This anti-social collective isn’t the most cohesive bunch though. When a group thrives on the pain and misery of others, cracks begin to divide the friends as torment and agitation becomes the new normal. These kids can’t relax without riling someone else up. Their prank videos become cruder and meaner as the group becomes bolder—barking like a dog leads to defecating on the hood of a car in broad daylight—and their shit-eating grins with messy glee. The kids in turn realise their own victimisation as each on thrives on hurting the others. United by their collective alienation, these kids are screwed.

Prank has a better eye for its offbeat surroundings and for the sociological glimpse at contemporary teen culture than it does for comedy as it trolls the supermarkets and empty lots of suburbia. Paced and structured largely through vignettes, many featuring the unwitting victims of pranks who never reappear, Prank both reflects the short attention spans of today’s plugged-in youth and plays to it, too, by giving short and punchy episodes that still amount to a whole if one checks the Twitter feed in between gags. Short bursts of animation and archival material add to the film’s way of flowing through life in between flickering images and constant distractions. Without these snippets of style, the coarse humour might feel without purpose.

Biron’s film challenges the audience to laugh and sympathise with these hooligans despite the fact that their amusement depends on causing pain to other people. The mean-spirited humour of Prank becomes increasingly off-putting as the kids become more awful by the minute. Consequently, the film grows more uncomfortable by the scene and less funny by the moment. Prank also isn’t that funny to begin with if one isn’t a fan of humour that relies on victimisation, discomfort, awkwardness, or shock value. It’s an acquired taste, but Prank also turns the humourlessness of the material back on the kids so that one appreciates the aimlessness of a generation that has its brain re-wired to shock value and attention-deficit entertainment. #malaise

Prank is now playing in limited release in Quebec.