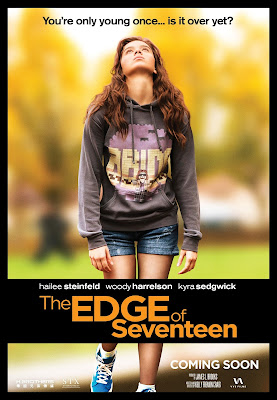 
Synopsis: Everyone knows that growing up is hard, and life is no easier for high school junior Nadine (Hailee Steinfeld), who is already at peak awkwardness when her all-star older brother Darian (Blake Jenner) starts dating her best friend Krista (Haley Lu Richardson). All at once, Nadine feels more alone than ever, until the unexpected friendship of a thoughtful boy (Hayden Szeto) gives her a glimmer of hope that things just might not be so terrible after all.

Thanks to VVS Films, Cinemablographer has ten (10) pairs of tickets to sneak peeks of The Edge of Seventeen at the following screenings:

Send your answer and full name to contests@cinemablographer.com with the subject ‘Edge of Seventeen – [city].’
~Don’t forget to include your city!~

The Edge of Seventeen opens in theatres November 18 from VVS Films.

*Entries that do not include a city or include multiple cities will be discarded.
**Limit one email entry per person/household per contest. Multiple entries will be deleted and marked as spam.
***Limit one win per person per month. Winners caught abusing the contest redemption system will be banned permanently from all future contests.