Canuck Oscar completists may now cross all the titles off the list of last year’s nominees! A War, Denmark’s nominee in the Best Foreign Language Film category, finally gets released in the Great White North after the intricacies off independent distribution deals kept it off the screens during last year’s race. That absence is a shame, for while A War might not have had much of a chance of toppling shoo-in/winner Son of Saul, it’s a smart, timely, and compelling film that deserves an audience.


Director Tobias Lindholm (A Hijacking) knows how to strip a story down to its basic elements and make it taut and riveting. Using a great script and a host of natural, dynamic performances, A War engages a complicated morality play that leaves no easy answers. The kinetic cinematography by Lindholm’s A Hijacking DP Magnus Nordenhof Jønck zooms in on the intimate human details to pack the film as tightly as a bomb as it creates the intense psychology of war. Part Courage Under Fire, part Eye in the Sky with a dash of The Deer Hunter, A War explodes the moral and ethical grey zones of contemporary warfare as one respected soldier finds himself in the crosshairs after making a split-second call in the heat of battle.

Said soldier is Commander Claus Michael Pederson, who gives the order to fire upon a bunker when the men of his squad find themselves on the receiving end of bullets they believe to be from the Taliban while securing a small village in Afghanistan. The threat is severe as the soldiers arrive and find an upsetting crime scene riddled with civilian casualties before the violence explodes. One of Claus’s top men takes a bullet from the heavy assault the unit encounters from an unseen sight in the distance. The chaos, noise, and threats from all directions force Claus to assess the situation in unfavourable circumstances.

The rules of engagement insist on a confirmed sight of the enemy before engaging and, following some discussion with the men at the base with whom he argues over the wire, Claus makes the call to fire and saves the unit. In such a tense situation—and Lindholm throws viewers into the dusty madness of the firestorm to appreciate Claus’s disorientation—one might make the same choice.

Claus might win the battle but he encounters a greater war when judge advocate generals pose some inquiries into his handling of the ordeal. The target, the military investigators say, was actually a civilian bunker and not a Taliban base. This revelation means puts blood on Claus’s hands and sends the soldier to stand trial for the deaths of 11 civilians—including children.

The soldier is a father himself as Lindholm cuts back and forth between Afghanistan and Denmark as Claus and his wife (Tuva Novotny) deal with the distance that the job creates between the family as three children go without their father for weeks and months on end. Here’s where A War really gets interesting. As Claus stands trial for his poor judgement call, his family continues to suffer for his absence. The film shows the alienation and divisions that war creates between families as tours put soldiers overseas for long stretches of time. Is Claus’s distance from his family his true crime if it was all in vain?

A War challenges viewers to consider how one might react in Claus’s situation. Testimony pours in from his fellow soldiers and officers, all of whom agree on the chaos and urgency of the moment even if reports are wildly inconsistent. While one might see the film’s line of inquiry as conservative given that it asks one to consider the loss of innocent lives, including children, as mere collateral damage in pursuit of a greater good, Lindholm’s tense and thoughtful drama weighs the practical realities of warfare: war simply isn’t a game of clear sightlines and easy calls. Asbaek’s strong performance lets the viewer wade within Claus’s inner war as his loyalty to his men and his children put his guilt in conflict with his conscience.  He captivates by giving the character a subtle awareness of his wrongdoing while maintaining his composure and resolute belief that the intensity of battle calls for tough choices. The trial asks him to make a conscious lie to counteract a naïve oversight. A War suggests that there is no clean shot in contemporary depersonalised warfare. The further one gets from horses and bayonets, the murkier the landscape becomes.

As Lindholm sections the film between a war drama and a procedural, he keeps A War as suspenseful and engaging in the courtroom as it is on the battlefield. This sharp, authentic war drama should be in any Oscar watcher’s sights. 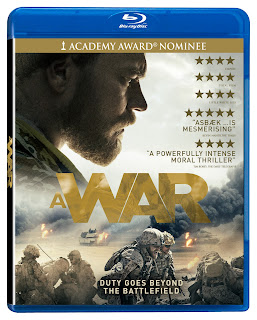 The disc: The intensity of A War, particularly the first act, makes one wish it could have experienced it in a theatre, but the 1080p 1.85:1 transfer keeps the drama explosive of the small screen. 5.1 Dolby True HD sound is especially impressive in the gunfire exchanges. The disc comes with English and French subtitles with audio tracks in Danish and en français, thus ensuring Anglophones’ eyes are on the drama and not the Twitterfeed.

Bonus features: Extra nibbles are scant, but it’s hard to complain when the disc gives us a film that was worth waiting for. On the menu is a five-minute behind the scenes featurette that takes viewers on location in the Middle East to explore how the filmmakers recreate authenticity of battle. (Who knew that a crewmember with a broom follows the cinematographer along the ground to kick up dust in all the shots?) The short doc includes interviews with Lindholm, Asbaek, and Novotny as they discuss the film’s three-pronged portrait of a family during wartime.

A War is now available on Blu-ray, DVD, and digital platforms from VVS Films.