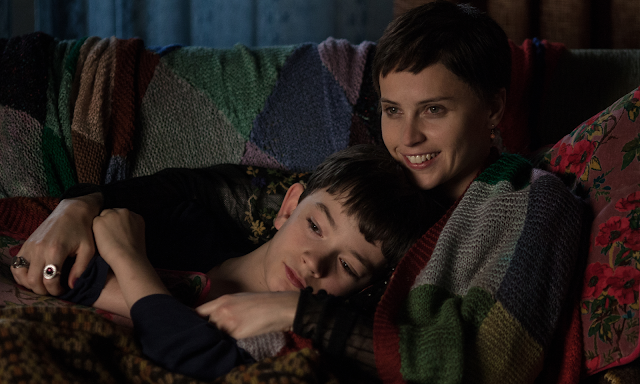 Story time is one of the best experiences children can share with their parents. Curling up with a good book, spending time together, and passing along advice through the power of the imagination is an essential part of growing up. As one watches Connor (Lewis MacDougall) learn valuable life lessons through tales of spells and magic, one can’t help but recall fond memories with mom and dad in which trips to faraway places made one feel safe and sound.


Crack open A Monster Calls this holiday season as Connor realises the potential of storytelling as he and his mom (Felicity Jones) turn their last few pages together. This dark and fantastical tale from J.A. Bayona (The Impossible) creates genuine magic with its journey through the imagination. The film adapts the novel by Patrick Ness and the author, penning his own screenplay, intimately connects the might of storybook fables with the journey of growing up.

Connor needs stories to keep him going as his mother struggles with an increasingly aggressive illness. She puts on a brave face, but Connor knows that her story ends much too soon. In the spirit of Pan’s Labyrinth, A Monster Calls summons imaginary terrors to let a child escape the pain of reality.

Cue a helpful friend in The Monster (voiced by a perfectly gruff Liam Neeson) who arrives every night at 12:07 whenever Connor taps his feet just right. The Monster lumbers through Connor’s neighbourhood and crashes through the streets, through the walls, and into the family home. He likes to break things and he teaches the young boy to unleash his grief and emotions through destruction, which explodes in a violent rampage in the stuffy home of his grandmother (Sigourney Weaver) where heirlooms, fine collectibles, and a child’s imagination collide like a bull in a proverbial china shop. Boys will be boys, especially when the right role model gives them the outlet they crave.

The Monster is no mean baddie though. While he speaks with a deep frightening voice and stomps through the hillsides like an ogre descended from a beanstalk, he is, above all, a kind mentor and placebo for Connor’s parents. (Connor’s dad, played by Toby Kebbell, lives in America with a new family.) As the wise Monster, Neeson’s voice strikes the right chord between fairytale darkness and Santa Claus cheerfulness: as a teacher and a father figure, this tree provides Connor with some worthy roots.

The film gives storytelling a prominent role as The Monster tells Connor that he will provide him with three fables. Afterwards, it’s up to Connor to tell The Monster a tale of his own and reveal his deepest fear. These three parables are the things of Brothers Grimm darkness and morals, and Bayona transports the audience to these magical lands through fantastic strokes of animation as the storybook fables become unique sequences of animated wonder. A Monster Calls draws upon classical compositions as the stories come to life with each of the three sequences assuming the aesthetic of old drawings from a different corner of the world. The magical aura of the animation blurs deftly with the outstanding visual effects as live action and CGI bring the two worlds together and The Monster uses the fables to plant a seed of wisdom within Connor’s mind.

A Monster Calls is a thing of wonder whenever the Monster appears on screen. Bayona creates a powerful figure akin to the tall leafy Ents in the Lord of the Rings films and the likeness of The Monster to these tree figures highlights how far visual effects have come in the fourteen years since The Two Towers. This sinewy and intimidating tree, replete with human-like movements, personable eyes, and currents of fire that ripple through his veins, is an amazing sight. Without the gimmick of 3D glasses, either, Bayona’s technical wizardry keeps A Monster Calls rooted firmly in the enchantment of its story. The visuals never overwhelm the film. Used sparingly only when The Monster appears to accentuate the fantastical strength he brings to Connor, the effects create moments of genuine escapism in what is really an unexpectedly deep tale about loss and the journey from boyhood to adolescence.

MacDougall, who had a small part in Joe Wright’s Pan, carries A Monster Calls remarkably well in his first big role and conveys Connor’s transformative journey with impressive conviction. The young actor appears in nearly every frame of the live action portions of A Monster Calls and the dramatic weight is his to carry despite appearing alongside talents like Felicity Jones and Sigourney Weaver. The latter of whom is particularly good as Connor’s brittle grandmother, who carries grief in her own way without any fun outlets to unleash her pain. The film is genuinely touching as Connor confronts the inevitable loss of his mother and comes to terms with letting go of her.

Bayona gives Jones and MacDougall one big emotional finale, but the true power of A Monster Calls comes in a moment of make believe when the earth crumbles underneath Connor’s feat and the spectacular visual effects yield to the boy’s story as he voices his innermost fear. Driven by a simple tale, dazzling flights of the imagination, and outstanding visual effects, A Monster Calls is bound to connect with anyone who ever discovered themselves through the pages of a good book.