The Gospel According to Marty 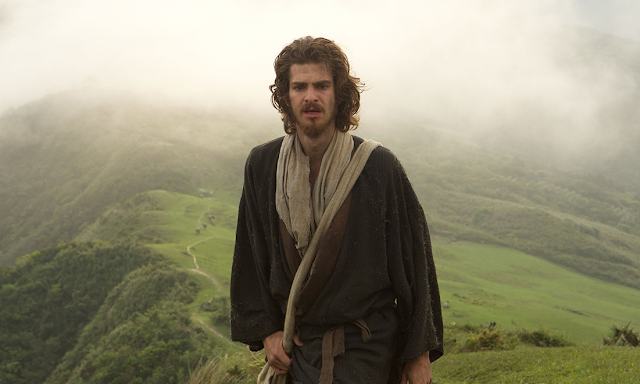 Martin Scorsese’s Silence is a cinematic meditation. This slow and pensive film is one of the director’s finest artistic achievements as he breathtakingly recreates 1600’s Japan to depict the persecution of Catholics and the priests who fight for the faithful. Silence patiently immerses the viewers in the profound crisis of faith of Father Rodrigues (Andrew Garfield) and the film is a departure for Scorsese, even by the standards with which one judges the side of his oeuvre that favours historical dramas over gangster flicks. More in the vein of The Age of Innocence than Kundun, Silence is a film to admire from a distance. It doesn’t invite an immediate Hallelujah!, but it’s one of the deeper considerations of faith on film in some time. Its holy waters take some time to tread.


The film uses as its springboard the devastating news that a Portuguese priest has apostatised and renounced his faith in response to the Japanese inquisition into Catholicism. Countless members of the flock suffer in the church’s name and Father Ferreira (Liam Neeson) agrees to stomp on an image of Christ to convince the sheep that their god is just a common shepherd. Stepping on a tile sounds like no big deal, but the symbolic significance of damning one’s entire existence and selling out the institution one represents is a heavy cross to bear.

Ferreira becomes a mysterious figure as Father Rodrigues and his compadre Father Garrape (Adam Driver) venture forth to Japan in search of the missing and, presumably lost, priest. The absent Ferreira offers a Colonel Kurtz of sorts as the priests literally and figuratively wander into the heart of darkness with hopes of finding this elusive man. Like the hunt for Kurtz, the quest for Ferreira represents a reluctant destination for Rodrigues: what happens when he finds the defector?

Rodrigues and Garrape part ways when their presence poses too great a risk for themselves and for the scatterings of Japanese believers who have been driven underground by the inquisition but practice their faith in secret. The priest journeys alone with the aid of a few Japanese allies, most notably a ruffian named Kichijiro (Yôsuke Kubozuka), who is a pariah among the villages for having given into the inquisitors and stomped the idol just like Ferreira. A Judas of sorts, Kichijiro is, yet Rodrigues initially finds himself charmed by the rascal since he desperately seeks confession to cleanse himself of his sin. Kichijiro is a thug to the Japanese but a slight symbol of salvation to Rodrigues: if Kichijro can detach his faith from an inanimate object, Rodrigues presumably may be able to do the same if challenged like Ferreira. A priest who is alive and made a statement under duress can do more for the church then one who died honouring its name, right?

This priest reconsiders his devotion to God when the deity sits in silent witness to the prolonged suffering of believers who agonise and die in his name. Removed from doctrine or ritual, the film contemplates the value of pure faith at its most basic level: does profound belief bring salvation or personal annihilation? The pain often pummels with greater fury than Raging Bull and the brutality stings harder than any hit in Goodfellas as Scorsese considers the role of faith in one’s life, an especially topical odyssey given the declining numbers in the church. Silence might be Scorsese’s most personal and radical film to date.

Silence also happens to be Scorsese’s most difficult and challenging film yet and it presents a gambit for anyone who loves the director for his films that crackle with intensity. The director’s long-awaited adaptation of the novel by Shûsaku Endô is an endurance and a test of faith in its own manner as Silence languidly dramatizes Rodrigues’s confrontation with his beliefs as he witnesses extensive suffering around him. It’s a lot of praying and a lot of reflecting, and one has the kind of patience for this sort of film or one doesn’t. One certainly approaches a Scorsese film with a different level of expectations than, say, a Tsai Ming-liang film or an Apichatpong Weerasethakul work, so kudos to Marty for convincing a major studio to make a film this grand and leisurely. But, Jesus, is this movie ever slow.

Scorsese paces the film with reserve and measure as Father Rodrigues observes faith and suffering around him. He simmers in silence and struggles with the goodness of God as he witnesses more pain than glory. He sits in search of a sign and, as hums of the cicadas raise an eerie presence on the soundtrack, Silence fills the void with dramas equivalent to slapstick comedy crickets. Doubling as a score, these pesky bugs are either the voice of God or an echo to his absence. Take your pick, and Scorsese frequently challenges the audience to either deny or accept the existence of God as they interpret Rodrigues’s struggle.

There is, however, a difference to the kind of religious film that Scorsese makes and, say, the kind of crap that Mel Gibson plops into theatres. Rather than preach to the choir, Scorsese actually engages with his faith to consider the value it brings to one’s life. The suffering of Silence is not physical, but mental and spiritual despite the grisly, Gibson-ly graphic violence Scorsese employs.

Even if one struggles to carry the cross of Scorsese’s heavy film, one must admire the hand that crafts it. The film is artistically and technically faultless with the production design by Dante Ferretti making haunting use of the natural landscape and resources in creating the film’s Edo era Japan, while the designer uses swathes of silk in the costuming to underscore the divides in culture through colours and elegance. Rodrigo Prieto’s cinematography creates Hell on earth in the hot baths of the mountains and barren voids through the hillside as Rodrigues searches for light. The performances are generally strong, despite some inconsistencies with the Portuguese accents by Garfield, Driver, and Neeson. The Japanese performers frequently steal Silence, particularly Issei Endo as a devilishly mannered samurai who leads the inquisition. The sadistic pleasure that this wise old man takes in testing the priests is frequently unnerving, but Endo brings such a playful gentility to the role that the inquisitor is among the most likable character in the film. Love the sinner and hate the sin, one might say.

The inquisitor’s likability brings out the greatest strength of Silence’s testament of faith. Rodrigues finds himself in a world in which two systems of belief are diametrically opposite. The Buddhist Japanese align their beliefs with the spiritual, whereas the Catholics’ emphasise salvation through suffering. These differences don’t mean that either character of Silence may find serenity over the others. Patience, perhaps, is the answer.

Silence is now in theatres.