Contest: Win Tickets to See 'The Space Between Us' in Select Cities! 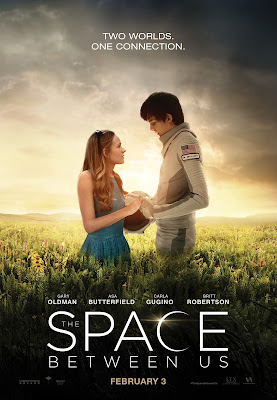 Asa Butterfield and Britt Robertson play star-crossed lovers in The Space Between Us, a new interplanetary adventure that’s The Fault in Our Stars meets The Martian. The Space Between Us opens February 3rd from VVS Films and Cinemablographer has tickets to give away in select cities! Answer the trivia below for your chance to win tickets!


Synopsis: In this interplanetary adventure, a space shuttle embarks on the first mission to colonize Mars, only to discover after takeoff that one of the astronauts is pregnant. Shortly after landing, she dies from complications while giving birth to the first human born on the red planet – never revealing who the father is.

Thus begins the extraordinary life of Gardner Elliot – an inquisitive, highly intelligent boy who reaches the age of 16 having only met 14 people in his very unconventional upbringing. While searching for clues about his father, and the home planet he’s never known, Gardner begins an online friendship with a street smart girl in Colorado named Tulsa.

When he finally gets a chance to go to Earth, he’s eager to experience all of the wonders he could only read about on Mars – from the most simple to the extraordinary. But once his explorations begin, scientists discover that Gardner’s organs can’t withstand Earth’s atmosphere. Eager to find his father, Gardner escapes the team of scientists and joins with Tulsa on a race against time to unravel the mysteries of how he came to be, and where he belongs in the universe.

Thanks to VVS Films, Cinemablographer has five (5) double passes to give away to sneak peeks of The Space Between Us in Toronto, Ottawa, Montreal, Edmonton, Calgary, and Vancouver. All you have to do to enter is answer the following question:

The Space Between Us director Peter Chesholm previously helmed which Canadian co-production?

Send your answer and full mailing address to contests@cinemablographer.com with the subject ‘The Space Between Us – [City].’
~Don’t forget to change your city!~

All screenings are Wednesday, Feb. 1
The Space Between Us opens in theatres on Feb. 3 from VVS Films

*Entries that do not include a city or list multiple cities may be discarded.
**Limit one email entry per person/household per contest. Multiple entries will be deleted and marked as spam.
***Please note that contestants must enter via email to ensure a valid entry. (A tweet/Facebook post counts for bonus points, but we need the answer to the skill-testing question and a city to determine winners.)
****Contest open to residents of Canada only.
*****Please note that entrants/winners caught abusing/spamming the ticket redemption system are banned permanently from future contests.