Contest! Win 'The Edge of Seventeen' on Blu-ray! 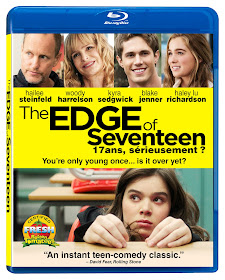 Synopsis: Everyone knows that growing up is hard, and life is no easier for high school junior Nadine (Hailee Steinfeld), who is already at peak awkwardness when her all-star older brother Darian (Blake Jenner) starts dating her best friend Krista (Haley Lu Richardson). All at once, Nadine feels more alone than ever, until the unexpected friendship of a thoughtful boy (Hayden Szeto) gives her a glimmer of hope that things just might not be so terrible after all.

Thanks to VVS Films, Cinemablographer has three (3) Blu-rays of The Edge of Seventeen to give away. All you have to do to enter is answer the following question:

What was the original working title of The Edge of Seventeen?

Send your answer and full mailing address to contests@cinemablographer.com with the subject ‘Edge of Seventeen’

The Edge of Seventeen comes to Blu-ray, DVD, and digital on Feb. 14 from VVS Films

*Entries that do not include a mailing address may be discarded.
**Limit one email entry per person/household per contest. Multiple entries will be deleted and marked as spam.
***Please note that contestants must enter via email to ensure a valid entry. (A tweet/Facebook post counts for bonus points, but we need the answer to the skill-testing question and a city to determine winners.)
****Contest open to residents of Canada only.
Pat Mullen at 2/08/2017 04:30:00 PM
‹
›
Home
View web version