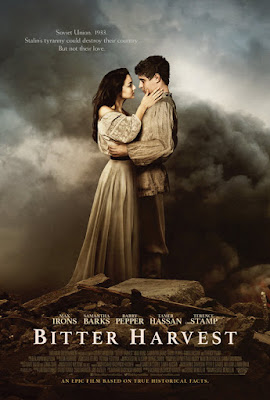 Canadian director George Mendeluk returns with the sweeping historical drama Bitter Harvest. Starring Max Irons, Samantha Barks, and Terrence Stamp, Bitter Harvest dramatizes the fight of rural Ukrainians standing up to the devastating campaign launched by Joseph Stalin and the Soviet Union. Bitter Harvest opens in theatres March 3 from D Films and we have run of engagement passes to see the film in theatres! Answer the trivia below for your chance to win!

Synopsis: Based on one of the most overlooked tragedies of the 20th century, Bitter Harvest  is a powerful story of love, honor, rebellion and survival as seen through the eyes of two young lovers caught in the ravages of Joseph Stalin’s genocidal policies against Ukraine in the 1930s. As Stalin advances the ambitions of communists in the Kremlin, a young artist named Yuri ( Max Irons ) battles to survive famine, imprisonment and torture to save his childhood sweetheart Natalka ( Samantha Barks ) from the “Holodomor,” the death‑by‑starvation program that ultimately killed millions of Ukrainians. Against this tragic backdrop, Yuri escapes from a Soviet prison and joins the anti‑Bolshevik resistance movement as he battles to reunite with Natalka and continue the fight for a free Ukraine.

Thanks to D Films, Cinemablographer has ten (10) double run-of-engagement passes to give away to see Bitter Harvest in theatres. All you have to do to enter is answer the following question:

Bitter Harvest star Max Irons made his film debut in which Canadian co-production?

a) Passchendaele
b) Being Julia
c) Pompeii
d) A Dangerous Method

Send your answer and full mailing address to contests@cinemablographer.com with the subject ‘Bitter Harvest.’

*Entries that do not include a mailing address may be discarded.
**Limit one email entry per person/household per contest. Multiple entries will be deleted and marked as spam.
***Please note that contestants must enter via email to ensure a valid entry. (A tweet/Facebook post counts for bonus points, but we need the answer to the skill-testing question and a city to determine winners.)
****Contest open to residents of Canada only.
*****Please note that entrants/winners caught abusing/spamming the ticket redemption system are banned permanently from future contests.