The ballots are in the mail as the race enters the final stretch! Best Picture seems like a done deal for La La Land, and that’s just fine by me, but this season offered one surprise after another beginning with the Golden Globe win for Moonlight just after Aaron Taylor-Johnson snuck past favourite Mahersala Ali that same night. Isabelle Huppert knocked out Natalie Portman at the Globes, then Denzel Washington and Hidden Figures shook up the SAG Awards before Dev Patel and Lion roared at the BAFTAs. With the exception of Best Supporting Actress—Viola Davis has that in the bag for her work in Fences—some races might be closer than we think. On that note, it’s time to send the annual memo to the Academy to vote with their heads—and hearts—for a few contenders that deserve the gold.

Tip your best pillbox hat to Natalie Portman. This hypnotic performance is a fascinating interpretation of an American icon. Portman draws upon Jackie Kennedy’s breathy voice, stately poise, and fearless strength in the aftermath of JFK’s assassination to deliver a unique take on a character who exists in numerous historical documents and images. The performance honours Mrs. Kennedy’s bravery and ability to march on in the face of danger, but also her insecurity with the legacy her family leaves behind The complex psychology with which Portman portrays the First Lady goes beyond a mere impersonation of a historical figure. She acknowledges the strength of Mrs. Kennedy while also challenging the portrait of a woman so many hold dear. It’s the bravest performance of the year and Portman succeeds with every risk she takes.

Ryan Gosling gives his most soulful and charming performance yet as Sebastian, the pianist and hopeless romantic in La La Land. His casual voice and easygoing dance moves give Sebastian the right bit of laissez fair attitude and rumpled spirit that a jazzman needs. He inhabits Sebastian’s aspirations and passion by tickling the ivories with gentle caresses, while his chemistry with Emma Stone offer is natural and earnest, innocent almost, which makes the ending of La La Land so poignant. The subtlety of Sebastian’s playing mirrors the performance, too, as Gosling smartly delivers a low-key turn as someone who holds his aspirations close, weighing his career and personal desires as he approaches the decision that most creative types must face in the pursuit of a dream. 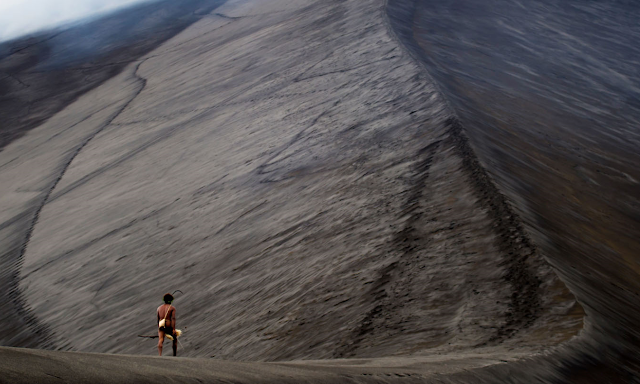 Australia has its first nominee in this category with Tanna and the film deserves to be its first win. This Nauvhal-language co-production shot on location on the island of Vanuatu is a breathtaking film in every regard. Directors Martin Butler and Bentley Dean work in close collaboration with the Yakel people who use their land, rituals, and stories to fuel a fable of tribal war that evokes the tragedy of Romeo & Juliet. On one level, the directors’ documentary roots bring laudable objectivity to this tale as they film the villagers in their surroundings with a respectful eye. Similarly, Tanna evokes awe with the proximity to which it brings one into contact with a fading corner of history. Tanna film literally takes audiences to the edges of volcanoes to watch the fates of two young lovers are uncertain, and the visually stunning fable asks how a traditional society balances the new ways with the old.

Composer Mica Levi underpins the fragile psychology of Jackie Kennedy with this haunting score that burrows under the skin of its central figure. Levi’s score adds an air of unease to Jackie that puts one right into the uncertainty of the period and the complexity of its character’s grief. Hypnotic, but also heavenly, these slippery strings are an audacious innovation in film composition.

Taylor Sheridan deconstructs American ideology in this rugged and unconventional western/crime drama hybrid. Fusing genres as he shoots the myth of Manifest Destiny square between the eyes, Sheridan’s script for Hell or High Water really is an astonishing film as a work that both comments on the collapse of America in the post-Bush years and anticipates the hell to come. Crafted with some of the most interesting characters of the year and cracking with several of the season’s most provocative monologues, like a speech Alberto (Gil Birmingham) delivers on the cycle of violence that eats America from the inside, Hell or High Water is a visionary, thoughtful, and grandly entertaining work of art. Bonus point: steak waitress.

Best Documentary Feature: I am Not Your Negro

Raoul Peck’s James Baldwin doc I am Not Your Negro is in an unusual race. This year sees not one but three nominees that comment upon race in America. The three contenders are probably leading the field and rightfully so. (But Gianfranco Rosi’s Fire at Sea is also excellent work.) The three frontrunners tackle the similar subjects from different angles, as Peck uses Baldwin’s writing to consider America’s history of racism and its present state of disrepair, while Ava DuVernay’s 13th looks the prison industrial complex as the new slavery and Ezra Edelman’s OJ: Made in America masterfully deconstructs the OJ Simpson murder trial/circus within America’s racial history. Put I am Not Your Negro, 13th, and OJ: Made in America side by side, though, and Peck’s film is the clear winner for two simple reasons. For one, he makes a similar argument as DuVernay with a much greater degree of finesse. As an archival work, Negro draws upon a pool of resources to blur past and present images to ask why America can’t learn from the past. OJ mines an extensive range of interviews and archival footage, and gets some revelations about which one could only dream, but it also has the benefit of a running time comprised of five episodes that are each as long as I am Not Your Negro. OJ is laudable work but another award for it exists: it’s called an Emmy. I am Not Your Negro, in its masterfully economical 95 minutes, is a feature documentary worthy of an Oscar.

A prize for feature animation should consider the full package: story, scope, score, and, above all, the artistry and innovation of the animation. Kubo and the Two Strings has it all with this thrilling fantasy adventure that boasts cutting edge stop motion animation and visual effects. The voices of Charlize Theron, Rooney Mara, George Takei and Matthew McConaughey are a blast, but the true star of Kubo is the pure originality and barrier pushing technical leaps taken by the Laika team.

2016 won’t be remembered as a great year for studio releases, but Denis Villeneuve’s smart sci-fi film Arrival will stand the test of time. In a year when sequelitis and moviegoer malaise noted the frequency with which film buffs revolted against movies they’d seen before, the success of Arrival is significant for mainstream Hollywood. Driven by a never better Amy Adams as an intuitive linguist who untangles the messiness of communication and encourages the world to see beyond differences of language and culture, the film is all too relevant in the era of President Trump. Arrival is even more impressive as a sci-fi film that anticipated the political reality in which it would be released.

Arrival by trusting an arthouse director to remain true to his vision while making a picture with the scope and scale of a Hollywood blockbuster, proves that large-scale moviemaking and bigscreen escapism aren’t dead. They just need fresh air and vision. Arrival awes audiences not with its special effects—when’s the last time a sci-fi film with a worldwide box office gross of nearly $200 million failed to land a nod for Best VFX?—but with its smart, yet accessible approach to science fiction. It enters another world through the mind and through the heart, and not by CGI graphics. A vote for Arrival is a vote to rejuvenate Hollywood with better, smarter blockbusters.

Which nominees should the Academy consider?