TIFF Next Wave Review: 'Before the Streets' 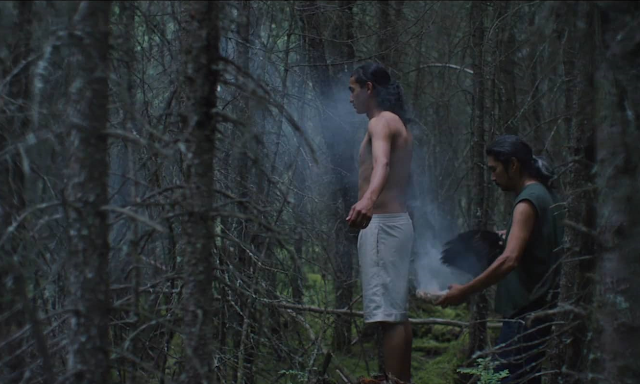 Every year as of late, the Canadian Academy nominates a completely random movie for Best Picture that flew under the radars of most of us covering the Canadian film beat. Demons barely saw life until it was a Canada’s Top Ten pick, Cast No Shadow invited a collective “huh?” when it scored four nominations, and the ever-confounding call for Maïna despite the film not screening at any qualifying festival can, for better or for worse, draw attention to a film that squeaked by us. (Or flagrantly chose to cheat the system, in the latter case.)


Now comes a film like Before the Streets (Avant les rues) a bold and breathtaking debut feature from writer/director Chloé Leriche. The film is utterly authentic, revitalising, and empowering. Before the Streets has echoes of Barry Jenkins’ Moonlight with its unflinching portrait of a young Atikamekw man named Shawnouk (Rykko Bellemarre) growing up in his community in rural Quebec. Leriche deserves to be as big a breakout here as Jenkins is everywhere.

Before the Streets carries six Canadian Screen Award nominations this year after opening in Quebec last April without much of a peep and it failed to play at any major Canadian festival aside from Whistler, where it swept the Canadian competition. This random Best Picture nomination is a good save on the Academy’s part. How on earth, out of all the discussions and wokeness initiatives to support both Indigenous content and female filmmakers, did Before the Streets pass by so many programmers and critics? Here’s a film that audiences need to get behind.

Toronto audiences, thankfully, can do that when Before the Streets hits TIFF’s Next Wave Festival this week. Audiences at Next Wave are in for a great discovery, since film is instantly riveting as Shawnouk finds himself on the run. An accident occurs when a white drug dealer (Martin Dubreuil from Felix and Meira) pays the boy to take him around the community and inadvertently puts himself between Shawnouk and a bullet when he tries to rob the principal of Shawnouk’s school. Leriche smartly places the gunshot outside the frame as the pair scuffles in a moment of quick chaos. While one feels certain that Shawnouk kills the man by accident, the film hangs heavy with the moral responsibility of taking another life.

As Shawnouk flees the crime scene and retreats into the woods, the local cop, Paul-Yves (Jacques Newashish), who also happens to be the live-in boyfriend of Shawnouk’s mother (Janis Ottawa), protects the boy from a legal standpoint while trying to save him from a paternal one. The concern on either side isn’t justice, but rather atonement.

Before the Streets roots the harrowing drama of Shawnouk’s isolation within the larger scope of the community with which he must reconnect to find salvation. Without the slightest hint of sentimentality, Leriche takes Shawnouk throughout his community and the surrounding area and shows the audience the poverty and difficulty that Canadians like him experience every day. Homes range from sparsely decorated to desolately shambled, while meagre jobs fail to keep the residents engaged, particularly the youth, which leads to boredom, addiction, and, ultimately hopelessness in many cases.

The film is also notable in terms of Indigenous Canadian cinema in that it tells a story of the present. (It’s also the first dramatic film in the Atikamekw language.) While ghosts of the past haunt the film, like Shawnouk’s absent father and the ripples of alcoholism that soak the community, Leriche constantly makes the characters look forward. There isn’t a reference to the Residential Schools (or, if there is, it’s fleeting) and the immediacy of the film reminds audiences of the work that needs to be done to assist communities to be independent and self-sustaining with the same access to resources and services that other neighbourhoods have across Canada. An apology isn’t enough.

Saying sorry doesn’t cut it for Shawnouk, either, as he finds himself in a tailspin until Paul-Yves intervenes. The boy embarks on a much-needed retreat to cleanse his spirit at a nearby sweat lodge where Leriche lets the camera take in its ramshackle plywood fixings. Before the Streets washes Shawnouk clean in a powerful moment in which a healer bathes him in smoke. Leriche lets the camera hang from a distance and the quiet, pensive moment connects the character within his surroundings. By mounting Shawnouk against the dark and expansive woodland, and by letting the viewer connect with Shawnouk in this thoughtful pause, Leriche forces the character to look inside himself as he deals with the guilt and responsibility of his action, but she also intimately bonds Shawnouk’s self-realisation with his connection and responsibilities to his family and community.

Using a cast of predominantly non-professional actors, Leriche also lends a natural voice to the film through the performances. Bellemarre suffers quietly as Shawnouk wrestles with his guilt and with the consequences that his actions may have on his family. Newashish is a presence of great power, while Kwena Bellemare-Boivin is quietly compelling as Shawnouk’s caring sister Kwena.

Leriche bookends the film with a song as Shawnouk and Kwena sing a traditional song in the forest. The tone changes from the first performance to the second. Both times, Leriche lets the song play out at length, but the opening number is sombre and melancholy—more a ritual than a performance. At the end, however, it is fierce and passionate—a reclamation of voice.

Before the Streets screens at TIFF Next Wave on Saturday, Feb. 18 at 6:30 PM
The screening features an intro and Q&A with Chloé Leriche and Kwena Bellemare-Boivin.

Note: tickets are FREE for moviegoers under 25!
Visit tiff.net/next-wave for deets on this year’s festival.