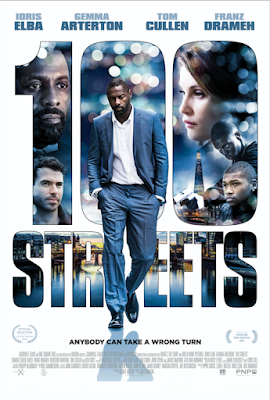 Synopsis: 100 Streets is a multi-stranded drama, set within one specific area of contemporary London. Max (an ex-rugby star), Emily (Max's estranged wife), Kingsley (a small-time drug dealer) and George (a cab driver) all face major choices and changes in their separate lives, even as their paths occasionally cross. "Three people, three extraordinary stories. All lived out within a hundred London streets.”

Thanks to Pacific Northwest Pictures, Cinemablographer has iTunes codes for free digital downloads of 100 Streets to give away! All you have to do to enter is answer the following question:

100 Streets stars Idris Elba and Gemma Arteton previously appeared together in which of the following films?

Send your answer to contests@cinemablographer.com with the subject ‘100 Streets.’