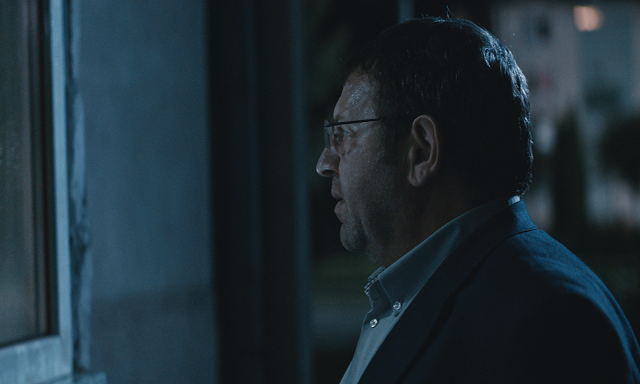 Less is more and this stripped back film uses the intimate scope of one family’s traumatic episode as a microcosm for a nation in crisis. Tragedy hits hard when respected doctor Romeo Aldea (Adrian Titieni, The Fixer) learns that his daughter, Eliza (Maria-Victoria Dragus, The White Ribbon), is the victim of a violent assault that occurred in the morning on her walk to school. Romeo, being a concerned father, worries that Eliza’s traumatic experience might adversely influence her upcoming final exams, jeopardise her acceptance to a British university, and cancel her one-way ticket out of Romania. As he wanders into the snake pit of Romanian bureaucracy (re: corruption), one sees why Eliza’s hometown doesn’t hold much of a future.

Romeo makes one bad decision after another as he becomes the corrupt pen pusher that his country toiled to escape after the socialist era. Bumping up a city official on the organ donor list, say, to snag Eliza a few extra minutes of exam time is just one of the efforts that the good doctor takes in his misguided attempt to be a better man. It doesn’t end well for Romeo—nor should one expect it to in a film like this one—and Mungiu lets the good doctor’s world collapse as the corruption disintegrates every support beneath him. Hypocrisy and corruption go hand in hand for Romeo and his success in getting Eliza through her exams relies on his ability to peddle his good reputation and name—never mind the fact that he’s having an affair when we first meet him.

The breakdown of his marriage and the family’s ensuing divide provide Graduation’s greater scenes as they intimately connect the social and psychological realism of Mungiu’s no frills, kitchen sink style. The director favours long takes and medium shots that could easily double as master shots for directors looking to establish a scene, but the overdrawn moments of Graduation sting with the restlessness and asphyxiation of a marriage, which, like the shot, has gone on for far too long. Romeo’s failure to bridge the divides in his family mirrors the disrepair of his larger community: corrupt practices are as effective as Band Aids from Dollarama are when it comes to healing.

Graduation is, in many ways, the film that Asghar Farhadi’s The Salesman strives to be in that they both put men on similar quests to restore honour to the women in their families following violent assaults by predatory men. The film benefits from keeping the scope of the drama zeroed in on the intersections between familial and social breakdowns, whereas Farhadi’s film somewhat muddles its staid morality play with a take on Arthur Miller that never comes to fruition. At the same time, Graduation also suffers from two drawbacks that mar The Salesman. One is an uncomfortable air of misogyny as the resolute patriarchs treat assaults on female family members as personal affronts. The other hiccup is that both directors lapse into routine. The style is there, but it’s something we’ve seen before.

Graduation delivers on the promise of 4 Months, 3 Weeks, and 2 Days in the sense that Mungiu has established a comfort zone that isn’t dissatisfying. (Praise Beyond the Hills all you want, but it’s inexplicably pointless.) Mungiu certainly owns the long take thing, the bare bones compositions, and the drab miserablism that looks hungry for a little light. Graduation carries the Best Director prize from last year’s Cannes Film Festival (he tied Oliver Assayas for Personal Shopper) but Mungiu’s compatriot Cristi Puiu should have taken it instead for Sieranevada, which does everything this film does and then some in a darkly funny satire. It’s not to say that Graduation isn’t worth a ticket, since delivers a film that is technically accomplished, socially relevant, and exactly what one expects it to be walking in the door, but one can’t help but leave the film fulfilled, if wanting a little more from the morality play.

No matter how much Romeo blunders, though, Mungiu and Titieni create a consistently compelling character. The father’s effort to safeguard his daughter’s future is understandable as he recalibrates his moral compass to lead him down the path he feels is right. The corruption becomes palpably swampy, yet there isn’t a moment in which one fails to hear Graduation ask what one might have done in his position. It’s a hard question to answer as Graduation teaches us just how easily anyone can be corrupted.