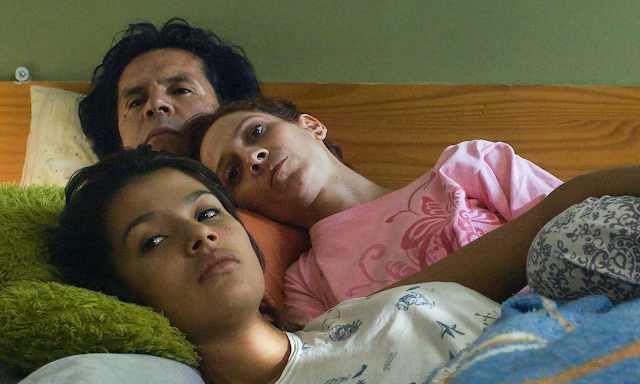 There are no big moments in This Time Tomorrow. There are no loud dramatic bursts, no screaming fits, and no outpouring of emotions. And that’s just fine.


This Time Tomorrow favours life as one experiences it. Day to day stuff, pauses, lounging around, and mixed emotions are the ways in which the film conveys the quotidian for Adelaida (Laura Osma), a 17-year-old girl coming of age in Bogotá, Colombia. Writer/director Lina Rodriguez offers a nicely observed and intimate portrait of Laura’s family over the course of a few days that will shape her identity in unexpected ways.

The film takes an episodic approach to Adelaida’s life and lets the audience simmer in the normal and loving relationship between the young woman, her mother Lena (Maruia Shelton), and her father Francisco (Francisco Zaldua). A long take, of which there are many in this measured film, observes Adelaida and Francisco nestled close together and watching the telly as Lena does some paperwork off-screen. Rodriguez holds the shot for a few moments as the exchange plays out in real time. As Adelaida lethargically beckons for her mommy to grab her some ice cream and Lena’s responses go from peaceful protests to playful rib-tickling, it’s clear that this girl has some growing up to do, but it’s equally evident that this family has a caring and intimate relationship.

This Time Tomorrow uses a slice-of-life style of measured tableau shots that provide snippets of life from Adelaida’s adolescence. Rodriguez captures these moments with intimate handheld camerawork that avoids any movement save for the obligatory jitter. The film gives pauses to young women like Adelaida through its reflection.

Adelaida grows up quickly for a film with such a measured pace. Long take upon long take observes her becoming more mature by the day. She giggles about sex toys with her girlfriend and some boys and starts seeing a classmate (Francisco Restrepo) more casually and frequently. Then, when one day tragically tasks her with facing adulthood and independence in a new light, the naturalism of the moment—a few tears and restrained shock—let the maturity sink in.

Rodriguez defines the film through moments like this one. The observational style of This Time Tomorrow isn’t quite like being a fly on the wall, since flies tend to flutter around a room and take in action from different vantage points. Instead, the viewer watches Adelaida and her family from a fixed position—not quite like Norman Bates-style voyeurism of peering through a peep hole, mind you, but more like standing outside a welcoming window looking in or flipping through a photo album in which each family photograph comes to life and tells a story. The effect might be taxing and alienating for some, but the languid naturalism of the style and performances makes the family warmly relatable.

This Time Tomorrow is now playing in Toronto at TIFF Lightbox.