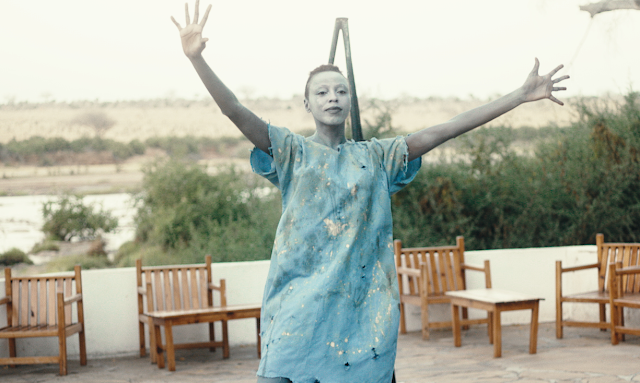 “Is this hell?” asks Kaleche.


Kaleche (Nyokabi Gethaiga) doesn’t know how she got to Kati Kati, which is an eerily and sparsely populated resort-like compound she faces when she awakens in the wilderness. Empty rooms and vacant halls are what she first sees—is this place the site of a massacre? If so, where is the blood? Her uneasiness with this resort leads her to keep exploring. Kaleche soon finds a group of people near the pool who offer her some alarming news: she is dead.

Kati Kati isn’t hell, but it certainly isn’t heaven despite having the fixings of an all-inclusive three-star resort. The destination is a bold setting for Kati Kati, which is Kenya’s own bold choice in this year’s Oscar race for Best Foreign Language Film. The film, produced by acclaimed German filmmaker Tom Tykwer (Run Lola Run, Cloud Atlas), deserves to be one of the breakout discoveries of the race. One is hooked from the first evocative images that see Kaleche wandering cautiously through the savannah. Kati Kati only becomes more engrossing with each bit of information it warily delivers.

The residents inform Kaleche that Kati Kati is where the dead wait before moving on to the next world. One man, Thomas (Elsaphan Njora), becomes Kaleche’s chief guide and shows her around the resort, explaining the difficult waiting game and unusual circumstances that brought them to Kati Kati. Thomas, for example, recalls arriving three years prior, while a fellow resident, Mikey (Paul Ogola), vaguely recalls time spent elsewhere. They wait in limbo to transition from one life to the next and an invisible barrier keeps them within the purgatorial garrison. Departure comes with difficult choices. When people do leave, they depart unexpectedly and violently.

In addition to the residents, Kati Kati features a handful of lost souls wandering on the periphery of the estate. These beings are near-doppelgangers for the residents, distinguished by ashen white skin that covers their bodies like a rash or contagious disease. Not everyone sees these beings, which appear and vanish fleetingly, nor do all the residents have a sickly evil counterpart following them around the premises.

Thomas has a particularly toxic relationship with his ghoulish facsimile, who seems to be a gatekeeper restricting his mobility between limbo and the afterlife. His alcoholism affords a demon to carry around of his own, and there are few moments where Thomas doesn’t have a hefty tumbler of whiskey in his hand. (One perk of being dead is living free from the consequences of excess.) On the other hand, the bigger the burden in one life, the harder it is to move to the next, and Kaleche learns shocking revelations about the baggage Thomas carries.

Director Mbithi Masya and co-writer Mugambi Nthiga keep the details and circumstances of the world of Kati Kati sparse and ambiguous as they invite us to contemplate the afterlife in all its complexities. They invokes a surreal world that is both unsettling and philosophical as the openness and uncertainties invite us to join Kaleche on her inquisitive search for answers into her own mortality and the anchors keeping her stranded between worlds. The residents of Kati Kati struggle to accept their deaths, both in terms of the circumstances that ended their lives and the finality of their mortality, and their days at the resort are restless and tense.

Kati Kati is, on some ways, a horror film with its speculative premise and atmosphere of eerie ambiguity. Masya keeps the film suspenseful and tense with the ghoulish gatekeepers who challenge the characters to confront their demons and face the future, but these beings aren’t to be trusted, either, with their skin-crawling appearances that evoke rotting flesh and decay. Kati Kati doesn’t let one decide if the world of the dead is a place to fear or embrace until one is ready to leave the comfort zone of limbo.

The characters hurtle towards this decision, too, since grey splotches appear on their own flesh. There is no pattern to the apparitions, nor does Kati Kati seem to face an outbreak of disease. These scars bring only further uncertainty as Kaleche and others feel themselves being stripped away with each ashen mark that appears.

The minimalism of Masya’s aesthetic ensures that Kati Kati is consistently absorbing and provocative. As a stripped back piece of genre filmmaking, it’s both exciting and poetic. Natural performances draw the audience into the characters’ quest for life and meaning—Gethaiga is especially strong as the soul-searching Kaleche—while the hand for setting and place lets the viewer feel as if one is, like Kaleche herself, straddling two worlds. The openness of the setting uses the natural landscape for its breathtaking beauty but also for the foreboding sense of danger that comes in the expanse of the savannah that stretches into nothingness. Evocative use of the natural light also ensures that Kati Kati is a resort in which the sun always looks to be rising or setting, but one can never be too sure which despite the warm colours that dance in the sky. Kati Kati is a haunting and meditative story about letting go.