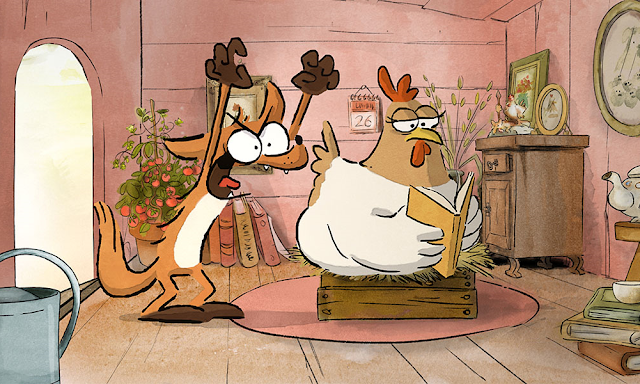 My family was never really big on movies when I was growing up. (Strange, I know!) But I distinctly remember a well-worn VHS tape of this cartoon Farm Frolics. The film, a 1941 Warner Bros. animation, featured a bunch of gags with animals on the farm, like pigs watching a clock, a hen who gets her eggs stolen, and a lazy dog. Fond and simple nostalgia, Farm Frolics is.


The ’toon finds its French successor in the feature animation The Big Bad Fox and Other Tales. This whimsical storybook lark features a ragtag group of animals in a few sketches of life on and off the farm. The film features three stories staged for minds young and old as the rascally, if clumsy, fox hosts a live Vaudeville-style performance for a crowd. The peanut gallery of farm animals causes a ruckus behind the curtain between acts, but, after the inevitable delays, Mr. Fox introduces audiences to a new story that whisks them to a magical little farm or French town for a breezy adventure.

The first story, “A Baby to Deliver,” sees a rabbit, a duck, and a pig assume the task of delivering a baby to its parents when the stork fakes an injury and ditches his duties. Pursued by the hungry wolf who eyes them up for snacks, the friends travel across the countryside by land, air, and water. Freewheeling shenanigans and harmless fun ensue.

Story the second is the titular tale of the big bad fox. This episode mirrors some of the Farm Frolics folly as the fox steals some eggs from a pesky hen. However, the eggs hatch chicks the fox can feast and the chicks assume the furry creature to be their mother and not a predator to be feared. No matter the bark or the bite that the fox shows the little chicks, they can’t resist him. This chapter of the film is easily the strongest and the smartest as it sees the fox go to all sorts of loony extremes to convince the chicks that he’s not their momma, which naturally leads him to dress up as a chicken and protect them from the big bad wolf who wants to eat them too. A run-in with some hens clucking self-defence moves is especially funny as the fox must face the penalties for his past crimes while trying to blend in with the sisters and mothers of bellyfuls that previously satisfied him.

Finally, the film ends with a Christmas story as the rabbit and the duck return and think they accidentally kill Santa Claus while playing on the farm. Taking a cue from their storking days and Dr. Seuss, they decide to save the holiday by masquerading as Santa and inspiring the local kids to believe in Père Noël once again.

The three stories are enjoyable for the whole family as they share messages of inclusion and compassion. Like all good fables, the tales of The Big Bad Fox are earnest quests that keep one’s spirits high. The beautiful animation delivers an imaginative canvas of 2D illustrations that evoke memories of storytime and the tales that got one hooked on such carefree adventures in the first place.

Fox is the latest lark from Patrick Rimbert and Benjamin Renner, two of the minds behind the Oscar-nominated French co-pro Ernest and Celestine, which happens to be one of the most delightful animated films of recent memory. Fox, like Ernest and Celestine, is another indie that could easily please kids and sophisticated art house audiences alike with its accessible tales, visually sumptuous palettes, and hilarious performances. The storytelling and the animation might quite match the bar set by Ernest and Celestine, but Fox is nevertheless a thoroughly enjoyable classically composed jaunt of carefree storytime fun. They’re stories one could easily revisit again and again.