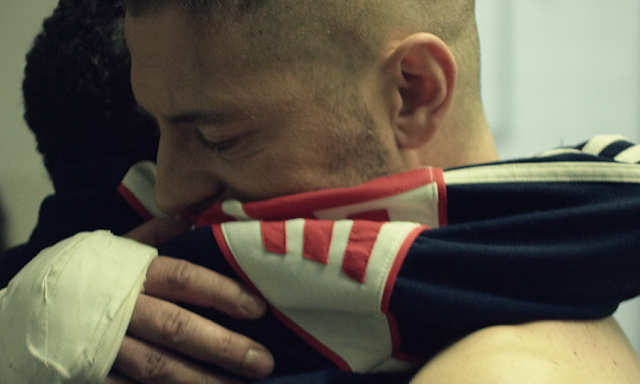 
Within this body of films comes Saint George, a Portuguese film about an off-the-books collection agent who muscles people to settle their debts. Saint George, Portugal’s submission to this year’s Oscar race for Best Foreign Language Film, is a dark and gritty portrait of the underworld that economic hardship breeds. The film draws upon the rampant social issue of debt and debt collection in Portugal, and director/co-writer Marco Martins admirably dramatizes the nation’s struggles during the 2011 downturn that included other European nations such as Greece, Ireland, Spain, and Cyprus. Saint George, however, like many of the struggling characters featured in the film, can’t quite deliver payment despite its good intentions.

The film stars Nuno Lopes (who won a prize at Venice last year) as Jorge, a down on his luck boxer with a sizable debt. Jorge takes a job as a debt collector to pay his way out of the hole while keeping up with his boxing matches on the side. The poetic tragedy of Jorge’s plight is that he needs to intimidate other people who, like him, are in dire situations of financial distress. The cycles of indebtedness are toxic and pervasive.

Jorge has understandable motivations for strong-arming people who can’t pay their bills, though, since paying his way means keeping his ex-wife, Susana (Mariana Nunes), and their son (David Semedo) in his life. Susana can’t find work and she plans to return to Brazil where she can be close to family and feel secure. At the risk of losing everything, Jorge goes full throttle into his boxing matches, trading punches with opponents and giving every spare dollar to Susana instead of to the loan sharks to whom he owes money. His fight makes his day job even harder because he knows the cost the indebted often pay.

Saint George is relentlessly dark and dreary as it embroils the audience in Jorge’s dire situation. Drab, gloomy, and often incoherently dark cinematography give this shadowy underworld of fluorescent lights an unforgiving, all-consuming air of despair. The bleakness of the situation is palpable, as is the cycle of indebtedness conveyed by the monotonous repetition of the story that sees Jorge caught up in the rut of collecting debts while struggling to make good on his own.

Saint George offers a mash-up of the Dardenne brothers and Jacques Audiard that doesn’t really satisfy as a slice of poetic realism or as a gritty fable. There is just no light to the film's unrelenting bleakness. One appreciates the irony of Jorge’s awful situation, but the sheer misery of the film overwhelms it. Saint George is sobering and realistic, authentic in its depiction of poverty and despair, but it’s also depressing as hell. Nuno, however, gives a performance of brooding intensity that often carries the quiet tension of the film. While it’s not enough to balance the books, it’s a start for Portugal's dark patronage.