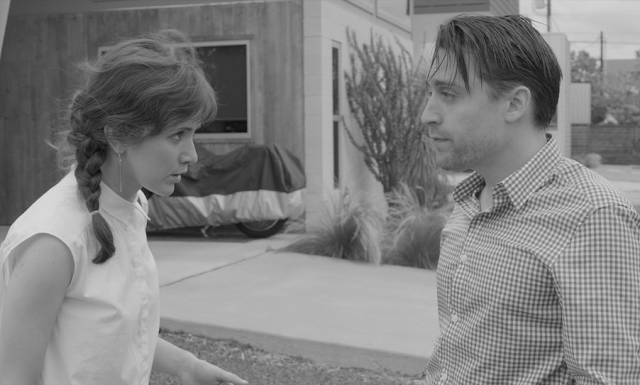 
Infinity Baby is a tale of stunted growth and arrested development as thirtysomething Ben (Kieran Culkin) goes from date to date in a mindless cycle of screwing girls and then screwing them over. He shuffles through them like a friend mindlessly swiping right and left, using people as distractions without the aim for creating tangible or meaningful relationships even if they’re short term. Culkin is just awful as the self-absorbed twerp who doesn’t give two fucks about anything. He just looks bored and the malaise is infectious.

The film also a storyline about a lab run by Neo (Nick Offerman) that produces babies that never age. Don’t even bother trying to reconcile the plot hole that assumes people actually want to take care of a screaming, whining, shitting, vomiting infant forever. These evergreen infants are just a ham-fisted metaphor for Ben and all the Millennials who don’t want to grow up.

A wildly inconsistent peanut gallery of characters populates a random assortment of nonsensical subplots, including botched babysitting duties that leave an infant dead and a running gag with Ben’s “mom” (Megan Mullally) who chases away his girlfriends. Infinity Baby is very disappointing as writer Onur Tukel’s follow-up darkly funny and pointedly satirical hiss fest Catfight, and the film doesn’t work on any level with its humourless, pointless, and lifeless speculative farce since director Bob Byington doesn’t give it any spark. The film’s mercifully brief running time of 70 minutes even feels overdrawn and has some tacked on gags with the credits, just to indicate what a bad idea Infinity Baby is. What a waste of time and (to some extent) talent.