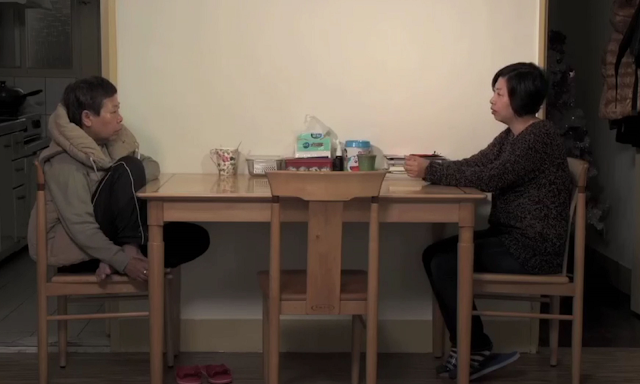 
When Huang breaks the silence and asks her mother a few questions about her personal life, this quiet, sullen, and tomboyish matriarch reveals a side of herself that her daughter never knew. Anu is a lesbian. Huang learns more about her mother’s secret life through forced conversations that reveal that Anu is actually quite the womanizer. She’s also a gambler and very bad with money, and Huang’s deep dive into her mother’s history of relationships uncovers a web of past lovers who’ve been touched by Anu and, in many cases, cheated or burned.

The uncomfortable silence of Small Talk marinates in the dangers of the unsaid. Huang learns about love denied as she interviews Anu’s past lovers who express a range of surprise and disbelief that Anu has children, while others recall the director’s abusive father and describe an awful, violent relationship from which Anu escaped with her child. At the same time, Anu’s family embodies the suffocating society in which the mother could not come out and express or celebrate the love she felt for these women. Huang’s aunts and uncles talk about Anu’s sexuality in a roundabout way, skirting the issue and answering questions by allusion. It’s very sad to see so many relationships strained by conservatism.

Huang mostly restricts her focus to confined interiors. The stories speak of concealment and confinement, so the drab visuals offer something thematically even if they do little aesthetically. (The low-key televisual style leaves something to be desired.) Tension and repression are palpable forces in the film as the documentary builds to some overwhelming catharsis when the director finally offers a secret of her own to her mother and the pair are both united, pained, and, perhaps, divided again by the news Huang shares with Anu. Huang asks her mother what life would be like if Taiwan recognized same-sex marriage, and the mother, who is a fairly difficult interviewee by any measure, finally breaks down. That Taiwan only made steps to recognize same-sex marriage after the film’s release earlier this year speaks volumes about the delicacy and significance of this conversation.