The award-season catch-up continues! Missed many goodies this year including the following:

Lucky
(USA, 88 min.)
Dir. John Carroll Lynch, Writ. Drago Sumonja, Logan Sparks
Starring: Harry Dean Stanton, David Lynch, Ron Livingston, Beth Grant
Could Harry Dean Stanton have found a better swan song than Lucky? This offbeat indie isn’t the late character actor’s final film (that would be the upcoming Frank & Ava), but Lucky gives Stanton the great lead performance that eluded him throughout his career. He will forever endure as a legend among character actors for his small but memorable turns as oddballs, weirdos, and creeps, particularly in the filmography of David Lynch, and John Carroll Lynch’s extremely Lynchian Lucky is smartly tailored to Stanton’s wiry frame and zen-like strangeness. It’s a perfect marriage between actor and character, and an even better endnote to a long career.

Stanton’s performance is especially touching since Lucky sees his title character confront his mortality. Lucky lives alone in rural Arizona where the land is as dry as his humour. He spends his final days smoking, drinking milk, and frequenting the local diner and pub. Daily encounters with the few people who live in the sparsely populated town remind him that he approaches the edge of his life, but Lucky takes the dwindling sands of time with an appropriately Harry Dean Stanton-like calmness and clarity. Death is just another step on a long and cool journey.

Fans of Stanton’s work with Lynch are bound to enjoy the director’s supporting turn that offers plenty of playful repartee with the actor, while some plum monologues embrace the endpoint of mortality and the new journey ahead. Much of Lucky simply lets Stanton quietly do his thing of staring off into space with offbeat charm. It’s a bittersweet pleasure to watch him inhabit a character with such lived-in confidence and coolness.

Lucky is playing in limited release. 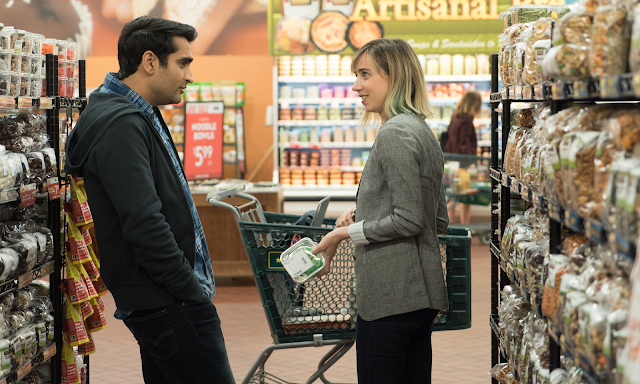 That trajectory isn’t ideal for any budding relationship, but it fuels the romance of Kumail and Emily in the sweet rom-com The Big Sick. Silicon Valley’s Kumail Nanjali and The F Word’s Zoe Kazan star as the ill-fated couple and their problems set in ASAP when they both realize that Kumail is cast in a remake of Guess Who’s Coming to Dinner? Simply put, his traditional Pakistani parents (played by Anupam Kher and Zenobia Shroff) are playing matchmaker with eligible Pakistani women. Bringing home a white girl would be a source of shame.

The Big Sick finds two great family dynamics in the humour of the culture wars that surround Kumail’s family table, while Emily’s parents (a heartbreaking Holly Hunter and a surprisingly good Ray Romano) are guarded and equally quirky, but eager to see the best for their daughter as she clings to life in hospital. Nanjali’s rapport with Romano and especially Hunter gives The Big Sick its best moments. The strongest relationship is the chemistry with the young man and his could-have-been-in-laws, rather than the rapport between Nanjali and Kazan (whose character is awfully hard to like), and there is something strangely satisfying about a rom-com that reminds us of the great importance of familial love. Like most comedies with Judd Apatow’s stamp on them, The Big Sick runs on far too long (it could be a greater film at 100 minutes) and features a lot of on-the-nose stand-up comedy routines in which characters express true feelings and show their vulnerability but director Michael Showalter plays it all with down-to-earth authenticity that makes the relationships feel real. Take two Golden Globe nominations and call us in the morning. 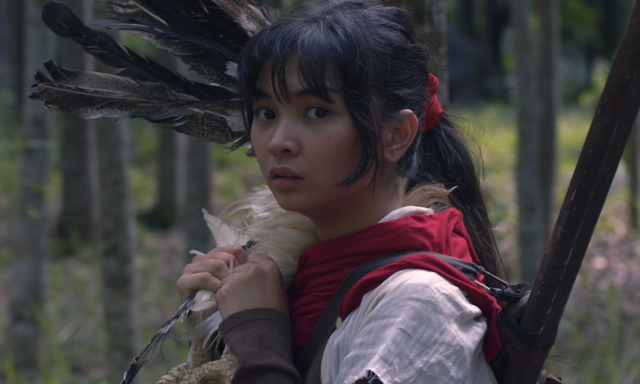 Experience an unnerving and violent coming of age story in Birdshot. Birdshot, the official Oscar submission for Best Foreign Language Film from the Philippines, is a dense and gritty father-daughter saga coupled with an explosive allegory of police corruption. On one hand, it’s a coming of age tale for a young girl named Maya (impressive newcomer Mary Joy Apostol) as she learns the ropes in the wilderness alongside her father (Ku Aquino). On the other hand, it’s a story of descent for earnest and well-to-do rookie cop Domingo (Arnold Reyes) as he learns the all-consuming elements of vice within the legal system.

Things go wrong for both Maya and Domingo (and everyone who crosses both their paths) within the same proximity. Maya’s dad is teaching her how to use a shotgun, and her restlessness with her poor aim inspires her to go practice on some birds in the woods. She pegs one. It’s an endangered and protected Philippine Eagle. In a conservation area. Oh my.

A dead bird doesn’t seem like that big a deal, however, since Domingo and his partner are investigating the strange case of a bus full of migrant workers that disappeared and resurfaced—empty—in Maya’s neck of the woods. However strange and suspect Domingo finds the case, and he really seems to be sniffing the trail of something sinister, his superiors insist that this matter with the eagle is of greater importance. Their fates align and violence explodes on the family farm as Maya becomes empowered by this test of endurance while Domingo becomes undone by his weak spirit, and the loss of innocence brings Birdshot to a bleak bloodbath of a finale.  Exquisitely shot and paced with brooding and thoughtful rigour, this meditative thriller exists in a world where everything gets corrupted. It’s an unnerving moral fable.