In the Fade (Aus dem Nichts)
(Germany/France, 106 min.)
Written and directed by Fatih Akin
Starring: Diane Kruger
Diane Kruger gives an exceptional performance as Katja, the grieving mother on a quest for vengeance, justice, and peace in In the Fade. She elevates this relatively run-of-the-mill procedural, which features some of the most implausible courtroom testimony outside of prime time TV, and absolutely deserves the Best Actress prize she picked up at Cannes earlier this year. It’s a career performance and surprisingly the first the first role of Kruger’s filmography to let her active in her native German. This latest film from Faith Akin tackles racism and xenophobia in Germany in the age of Brexit and tightly-guarded borders, and it pits Kruger’s Katja on a delicate journey akin to that of the tortured souls in The Edge of Heaven, another of the director’s works that deals with grief and loss against a backdrop of migration and global change.


Katja experiences a deep and incomprehensible loss when her Turkish husband Nuri (Numan Acar) and son are killed in a bombing that targeted the family business. Katja is the lone eyewitness to the suspected bomber having run into her just minutes before the attack, yet the investigation puts more weight into probing Nuri’s past than it does the xenophobic motivations that likely sparked the bombing. Kruger infuses In the Fade with profound moral depth as Katja struggles to find closure throughout the proceedings. The challenging range of emotional shifts that Kruger handles dexterously is most impressive—and effectively moving—since it crafts a complicated woman who demands empathy even when her actions put her down a road of no return. In the Fade is Germany’s Oscar submission for Best Foreign Language Film, but it might find better traction with a campaign focused squarely on Kruger’s performance.

In the Fade opens in Canada January 19. 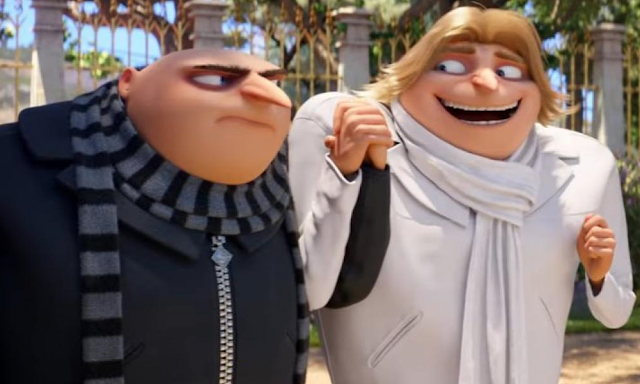 I honestly do not understand the longevity of this franchise. No parent could possible love his or her child enough to subject themselves to another despicable Minions movie if they’ve seen the one before. With that as a preamble, let me know say this: if you thought the first few Despicable movies were insufferable, you ain’t seen nothing yet! Despicable Me 3 is more annoying than the previous films combined, since this one has not one but two Steve Carell voiced anti-heroes as Gru meets his creatively named brother Dru, who is his superior in every way. (He’s even more irritating!) Throw in Trey Parker’s exasperating villain Balthazar Bratt, a former child star turned baddie with arrested development, a bad haircut, and even crappier dance moves, and this round of Minions mayhem is enough to make any person of sound mind reconsider ever having children.

These movies just aren’t funny on any level, and the amount of pandering in the writing is an embarrassment to watch. Some movies targeted for kids are successful when it comes to integrating jokes for parents, but the Minions franchise struggles to muster any jokes that are a) funny or b) relevant. It’s just a lot of dated pop culture reference mashed into crude animation voiced by annoying characters.

Mudbound
(USA, 134 min.)
Dir. Dee Rees, Writ. Virgil Williams, Dee Rees
Starring: Carey Mulligan, Garrett Hedlund, Jason Clarke, Jason Mitchell, Mary J. Blige, Rob Morgan, Jonathan Banks
I really, really want to like Mudbound more than I do. I appreciate the significance of this new film by director Dee Rees (Pariah) in that it gives a tale of racism in the American South using multiple points of view from characters black, white, male, and female, and affords them all equal weight, but Mudbound features the same strengths and weaknesses as its source novel by Hillary Jordan. The adaption by Rees and Virgil Williams replicates the choice to feature multiple narrators and the different focal points of Mudbound don’t have the same clarity on film as they do in the novel. The novel resembles a poor man’s As I Lay Dying with its carnival train of characters in a crumbling Southern dynasty, but the sprawling and bloated narrative is difficult to follow even if one has read the book. The fractured narrative doesn’t do its myriad of characters any justice by flitting from one to the next. There is way too much going on in this movie, so it’s hard to connect with any character or with the overall chorus.

Mudbound features some truly exceptional performances, though, particularly Garrett Hedlund and Jason Mitchell as a pair of young war veterans who experience the valour of their sacrifice much differently upon returning home. The parallels and contrasts of their narratives say a lot about the deeply entrenched racism of America, while the damaged, soul-searching nature of their performances ask how one can even make sense of such a futile system of racism after the atrocities the soldiers combatted in Germany. An unexpected turn by Mary J. Blige also impresses with its restraint and composure, while the music by Tamar-Kali and the cinematography by Rachel Morrison add to the rich sense of place. There’s a great film in here somewhere, if only Mudbound were the sum of its parts.

Mudbound is now on Netflix.