Blu-Ray Review: 'All I See Is You'

All I See Is You
(USA, 109 min.)
Dir. Marc Forster, Writ.
Starring: Blake Lively, Jason Clarke, Ahna O’Reilly, Miquel Fernández, Danny Houston, Wes Chatham
Jason Clarke is a sad sight in All I See Is You. One has to hand it to an actor for letting his mug be the face of disappointment as James, the pathetic and controlling husband in this new drama from Marc Forster (World War Z). Just look at the blank reaction of James’s wife, Gina (Blake Lively), when she regains her sight for the first time in their marriage. The film introduces Gina as she makes love to James, whom she imagines as a hunky Latin lover delighting her amidst a CGI orgy of bodies writhing in a kaleidoscopic field of fantasies. Then, when she opens her eyes and sees her husband for the first time, Gina wears a vague expression that reads, “I married this?”

That same reaction lingers over All I See Is You. Straight from its glitzy TIFF premiere to home video with a 17-month stopover in between, All I See Is You isn’t gunning for Oscars. This ambitious and well-intentioned drama/thriller gives Lively a juicy part as a blind woman who regains her sight and sees her marriage through a new perspective. There’s just something off to the film, though, as Lively acts circles around the story, her director, and co-star. Like Emily Blunt in The Girl on the Train, Lively’s performance in All I See Is You is in a different and better movie.

Gina is an odd character who struggles with her mobility and independence despite having lost her sight in an accident during her youth. The film shows fleeting flashbacks of the car crash and close-ups of Gina’s bloody teenage eyes, but one would think she lost her sight yesterday from the way James babies her and guides her around their Bangkok apartment. (Why they live in Thailand also isn’t clear, especially since the few scenic sights happen in Spain.) Gina doesn’t have any discernible life outside of going to the pool, lounging around the apartment, and hanging out with their child neighbour. From the outset, All I See Is You offers a problematic depiction of disability in which the loss of a sense is the loss of one’s independence.

Then something shifts when the film comes to its second act. Gina undergoes some fancy surgery that restores her sight. James realizes that his wife might strive for more when she sees him and then herself in the mirror. James plays the caring husband, but he’s really just too insecure to let Gina grow up and be in control of her life. Their nurturing relationship is a smokescreen for a charade of power and control. Their happy life is really a complicated marriage victimization and predation.

Forster doesn’t have much of a sense of what kind of film to make of this relationship tango. All I See Is You might be the inevitable culmination of his scattershot filmography of moody genre flicks (Stay, World War Z), hard-hitting stories in foreign lands (The Kite Runner), searing domestic dramas (Monster’s Ball), family movies (Finding Neverland), and action movies (Quantum of Solace, Machine Gun Preacher). Oddly paced and weirdly realized, All I See Is You simmers with tension and missed opportunities. The film seems to be building towards an explosive moment, but it just fizzles out with the blind leading the blind. Strange visuals convey Gina’s sightlessness through blurry bits of refracted light, while the kaleidoscopic motif flutters in and out of the film as Gina imagines the sights she’s missing. 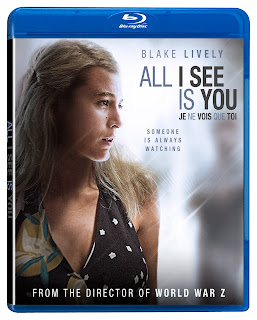 The film only works when it lets Lively test herself. She’s capable of being both vulnerable and seductive as Gina tries to reconcile her newfound agency with years of victimization. Clarke, on the other hand, is downright boring, and All I See Is You struggles to ignite fiery stakes in the relationship as James’s insecurity mounts. A stronger actor with better screen presence might have exploded the film’s commentary on toxic masculinity, so Clarke’s wishy-washy loser makes the drama intermittently dull. When Forster puts Lively in control of the relationship, like in a scene of a train where Gina gets a psychosexual thrill from being kinky and watching her reflection in a window, one gets a better sense of the film that Lively thought she was making. What remains is nevertheless a respectably ambitious performance as Lively continues to make unconventional choices and often surprising choices.

The disc: All I See Is You comes packaged with Dolby 5.1 True HD and a high def video transfer that capably conveys the moody tones and textures of the cinematography by Matthias Koenigswieser. The intimate scope of the film caters just fine to home viewing, so missing a theatrical release doesn’t pose much of a loss to the film, particularly since one can fast-forward through Clarke’s scenes. There aren’t any bonus features, but some trailers at the beginning bring good news that I, Tonya is just around the corner!