In Between: Lives of Girls and Women in Tel Aviv 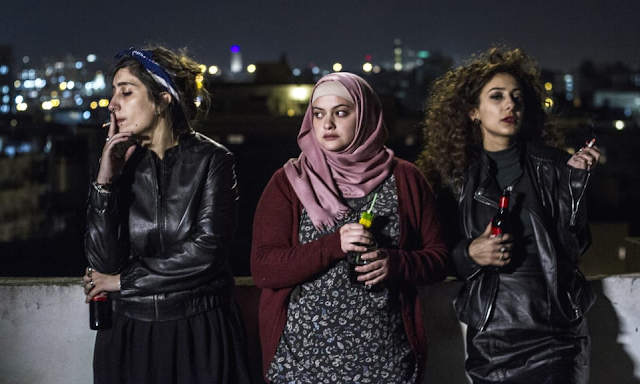 Discover a voice in writer/director Maysaloun Hamoud. Her feature debut In Between is a welcome drama about Arab women negotiating love and independence within a male-dominated society. Set in the Arab quarters of Israel, In Between presents three women who are outsiders among outsiders in a world wrestling with change. It’s a bold and funny tale of female friendship and women’s rights.


In Between is the story of the story of two roommates enjoying their independence in Tel Aviv. Laila (Mouna Hawa) is a smart lawyer by day and the life of the party at night, while Salma (Sana Jammelieh) is a shy bartender who aspires to be a DJ and find love outside of the arranged marriages her parents are planning. The two women live it up at rowdy parties where they put their drinks up, snort cocaine, and dance the night away with men, women, friends, and lovers. Hamoud fearlessly presents an image of Arab women that we don’t commonly see: these girls break taboos and defy convention.

Enter Noor (Shaden Kanboura), the conservative hijab-wearing cousin of their roommate who arrives to sublet her space. Noor embodies the image into which women have traditionally been framed in this patriarchal society. She’s a shy teetotaler and non-smoker who prays as often as Laila swears. She’s weary of these carefree liberal women and she’s not afraid to let them know she disapproves.

While the three women couldn’t be more different, they encounter a shared struggle against a system that insists they play the part of subservient wives. Laila meets a hunky, coke-sniffing, self-described liberal who reveals himself less progressive than he claims as their relationship develops. Salma undergoes a newfound sexual awakening that brings shame to her parents. Noor, finally, seems content to please her fiancé Wissam (Henry Andrawes) and play the dutiful wife, yet her roommates open her eyes to new experiences. She becomes more open-minded and contemporary, to which Wissam responds violently.

Hamoud draws three strong performances from her actresses who honour the lives and experiences of these women. Hawa has extraordinary screen presence and is a fiery power as Laila, a woman who is equally sexy and smart—and not the least bit afraid to use either trait to stand up to men. Kanboura gives a performance of quiet dignity as Noor and her strong character arc offers a humble woman who  blossoms and sees her colours for the first time. Salma is a bit more limited a role than the other two are, but Jammelieh invests an earnest hunger in the character who yearns for a world where she can simply love openly and freely. The three leads are rich and dynamic representations for women whose experiences are only getting such nuanced characterizations for the first time. They provide strong metaphors for a society that wrestles with its own identity and traditions in a world that moves at a different pace and insists that women have the right to do more.

One wishes that a similar level of care went into crafting the male characters of the film, however, since nearly every man in the film is an awful one-dimensional pig. (Noor’s compassionate father is the only redeemable male in the film.) More balance might have let the film soar even higher, but this drama is all about the women. As a tale about the lives of girls and women, though, In Between is a necessary discovery.

In Between is opens in Toronto at Cineplex Canada Square on Feb. 16.