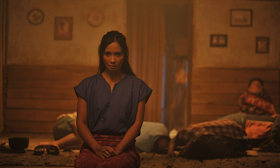 
Marlina the Murderer in Four Acts is a bloody good western for the #MeToo era. Although shot long before and unveiled at Cannes last May before the movement began, this Malaysian-Indonesian co-pro has its finger on the culture pulse. Marlina is an arthouse genre flick to devour as director/co-writer Mouly Surya boldly introduces herself with a confidently badass take on a traditionally male genre. Marlina (Marsha Timothy) has boots made for walking. She handles her mission with coolness and confidence, yet not a speck of mercy.

Surya steeps Marlina’s home in death from the beginning. Some nasty crooks find their way into Marlina’s modest little domicile, but the stark tableau of Surya’s setting puts an ominous tell in the right corner of the frame. Perched peacefully, roped upright, and poised like a meditating monk, Marlina’s husband sits deferentially out of his wife’s way. There’s just a catch: he’s dead. Whether Marlina is responsible for his death is a mystery that permeates the air as Marlina takes stock of the five lecherous men who rough her up and demand a hot meal.

Not one to take an order of “woman, get in the kitchen,” Marlina adds a special spice to her soup that might make the ladies of The Beguiled or Phantom Thread blush. A few poisoned goons later, Marlina is ready to run, except there is one baddie left. In the bedroom.

What follows is a violent rape that leads Marlina to use the full force of her power. She disarms her assailant, beheading him in the process, and stumbles away free.

Marlina the Murderer in Four Acts cuts from its spectacularly tense first chapter into a stranger, almost quixotic road movie as the heroine strides along the dusty roads towards the city. She carries her machete and her rapist’s head as her bounty. She’s one tough mofo, but her shock yields confidence and a moral centre that the best lone heroes of the westerns embody. Marlina’s mission is to deliver the head of her assaulter to the police. This man deserves to be held accountable for his crime.

The sidekicks and baddies accumulate as Marlina assumes the care of a pregnant neighbour, Novi (Dea Panendra), and becomes hunted by Markus (Egy Fedly) the lone survivor of her spicy chicken soup. He’s hell-bent on retribution. Surya laces the ensuing chapters of Marlina’s odyssey with artful dark humour. Slow and pensive passages give the film a philosophical serenity as Marlina aspires for a world in which men favour non-violent behaviour. The golden hillsides, shot exquisitely by DP Yunus Pasolang, offer a peaceful frontier that Surya splashes with Tarantino-esque jolts of violence. It’s morbidly funny, sometimes gleefully so, as the machetes fall on men prone to misconduct.

There’s an element of timely retributive elation to the violence of Marlina. Every guy in this movie is a rapist, creep, asshole, fool, or some other permutation of misogyny incarnate. (Save for one model soft-spoken man on the bus.) The police, while non-violent, might be the worst of the lot since they open their foul mouths and put the blame on Marlina. Just their word choices—questions about how Marlina “let” her assailant rape her—are enough to cheer her on to add more heads to her haul. Marsha Timothy gives a strong and forceful performance as the heroine. She’s an intimidating screen presence when she’s alone, walking the street solo in the scorching heat, but she’s twice as big a force when she shares the screen with any of the lacklustre men of the film.

One could easily gripe that Surya creates the revitalizing feminist force by falling back on typical western iconography. Cowboys, samurais, and soldiers often define their strength by the size of their swords or the calibre of their guns. The film doesn’t necessarily equate Marlina’s machete with a big swinging dick, but the element of psychoanalysis is so deeply enmeshed within genre iconography that it’s hard to overlook the fact that Marlina endows both its female characters with agency when they wield phallic symbols. Especially since the film has such tangible indebtedness to classic westerns, even if only to reinvent them, one can’t ignore the masculinization of the heroines in key moments.

Surya redeems the violence with an invigorating tale of sisterhood as Marlina and Novi find themselves empowered not by violence, but by their ability to create a new life. Novi’s baby bides its time, ready to pop from act to act, and the film culminates with a hopeful image for the future after all the carnage. Here’s the true vision of the film: Marlina doesn’t see the final frontier as land to be conquered. It’s the reminder of humanity waiting for release.