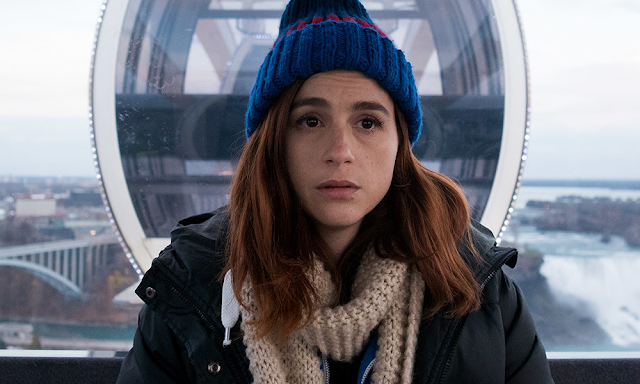 Her name is Mary and she’s an alcoholic.


Mary (Aya Cash) isn’t even 30 years old, but her life is so hot a mess she could be turning 40. At the rate she pounds the bottle, though, Mary will be lucky to live past 35. Mary hasn’t had an easy life, having lost her mother at 18 and seeing her dad flee the responsibilities of parenting shortly thereafter, so her inability to cope is understandable.

The irony to Mary’s story is that she works as an addictions counselor. She floats through life fully aware of the feel-good vibes and chicken soup fumes that aim to rehabilitate troubled souls like herself. Her life is an empty cycle of benders and hangovers as she avoids her problems by marinating in the ills of others and consoling herself with the comforting warmth beers and whiskies. A disastrous episode of day drinking, a DUI, and a YouTube video later, however, Mary realizes she better wake the fuck up.

The first step is admitting one has a problem and Mary Goes Round delicately portrays the long and difficult warm-up towards putting this first foot on the ground. Writer/director Molly McGlynn, making a promising feature debut, gives audiences 84 minutes to inhabit the space of alcoholics who suffer in lonely anonymity as Mary’s alcoholism lets her escape her despair and then fuels it the morning after.  Mary Goes Round is a great portrait of addiction as an illness, as something that consumes a person and controls her life, but it’s also a thoughtful study of epidemic of hopelessness and self-pity afflicting Millennials like Mary who feel out of place in the sanitized world of adulthood.

Mary gets a nudge towards confronting her problems when her dad, Walt (John Ralston), calls her unexpectedly and invites her to home to Niagara Falls. She accepts the offer, partly because her life in Toronto is shot to shit and partly to meet her teenage half-sister, Robyn (Sara Waisglass). It’s only once home, however, that Mary grasps the depths of her hopelessness. She doesn’t feel at home or grounded anywhere and flips between AA meetings and drinking alone, often on the sad and pathetic merry go round that’s the perfect metaphor for her cycle of self-destructive behaviour.

As Mary, Cash is very strong in a lead performance that carries virtually every frame of the film. She brings to the screen a feisty restlessness that recalls Anne Hathaway’s haggard addict in Rachel Getting Married, and rises to the challenge of creating a character who is often difficult to like, but demands sympathy throughout her ordeals. At the heart of the film is Mary’s relationship with Lou (Melanie Nicholls-King), a fellow alcoholic on the road to recovery who knows more about Mary’s life than she lets on. Nicholls-King’s performance is a highlight of the film as she consistently offers a shoulder for cash in Lou’s seemingly indefatigable chipper attitude that gradually reveals itself as being as much of a support for her as it is for Molly. One particularly great scene sees both characters at rock bottom and Mary Goes Round dares audiences to cast judgement on anyone wrestling with such personal demons.

McGlynn delivers on the potential as of her shorts like 3-Way (Not Calling) as she envelopes audiences in a rich and believable dramedy grounded in strong characters and messy situations. Mary Goes Round is sad and funny, well balanced with its cocktail of heartache and humour as McGlynn explores the corners of Mary’s strength and vulnerability. McGlynn makes strong use of the cold slushiness of the winter landscapes to accentuate the melancholy atmosphere and keeps the production well within an intimate scope that, like its lead character, has some necessary roughness to its edges. It’s a confident first step in feature filmmaking.

Mary Goes Round is now available on home video.