Having Their Cake and Eating It Too 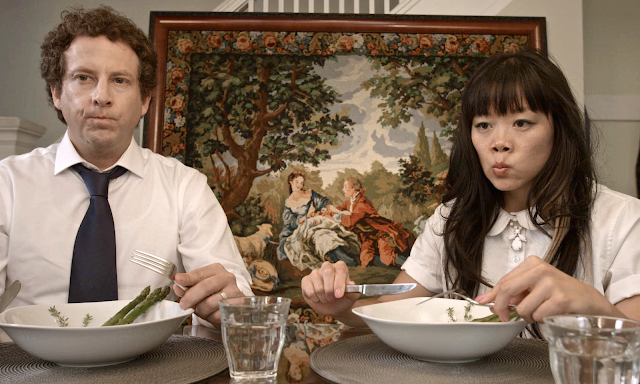 This week’s quirky microbudget Canadian dramedy opening at the Carlton is The Death (and Life) of Carl Naardlinger. Not to be confused with Xavier Dolan’s always-in-the-works The Death and Life of John F. Donovan starring Kit Harrington, Natalie Portman, Jessica Chastain, and Susan Sarandon, this offbeat little oddity is as far away from the visual panache of the Dolan world as one can get. Writer/director Katherine Schlemmer concentrates on the characters and “what if” scenarios of connection and chance that her slightly speculative film develops. Most of the budget probably went to catering, but to Naardlinger’s credit, this is a rare Canadian film in which the actors actually eat their spring mix instead of just pushing it around their plates.


The significance of foodstuffs kicks off the film. Carl Naardlinger (Matt Baram, Two 4 One) is mopey on his birthday as he and his wife, Pam (Miss Sloane’s Grace Lynn Kung) celebrate by cutting tiny slices from a handsome cake—presumably preserving the rest for reshoots—when the doorbell rings. The detective or self-described “Missing Persons Person,” played by Anand Rajaram, informs Pam that he’s following up on the disappearance of one Carl Naardlinger. This can’t be because, as Grace and Carl observe, Carl’s in the house enjoying his birthday cake!

Long story short, the couple discovers that there are two Carl Naardlingers in Toronto. Things get even weirder when they learn that the missing Carl dropped off the grid right after he finished decorating the other Carl’s cake. Perturbed by the realization that his own life could have ended, Carl endeavours to find his unseen doppelgänger. His quest leads him through the footsteps of his fellow Naardlinger as he traces a path through Carl’s home, meets his oddball roommates (Beatriz Yuste and Ryan Hughes), politely declines their baked goods (re: budget), and wanders thoughtfully through the lush ravine where Carl was last seen. It’s a simple premise and Schlemmer, making her directorial debut, keeps Carl’s existential quest thoughtful and engaging.

There is, admittedly, a lot that doesn’t work about the film, like all the supporting performances and the perceptible budgetary constraints. Carl is one of those movies where every interior setting is a spic-and-span to the point of sterility and each sparsely staged apartment doesn’t look comfortably lived in. Many of the players are as awkward as the settings are as Carl flits through the other Carl’s existence. However, a film like The Death (and Life) of Carl Naardlinger relies on two things, the story and the lead actors, and these elements are the stronger aspects of the show. Carl’s frustration with the apparently pointlessness of life is honest and sincere, while the speculative twist of the premise lets one check one’s own disappointment with life at the door. It’s thoughtful minimalist escapism.

The leads also keep things fresh and engaging by creating two offbeat and relatable characters. Kung is especially good with her comedic timing often keeping the beat to the film. There’s a breezier lightness to the film whenever she’s onscreen and one hopes to see her move on to other things. The Death (and Life) of Pam Naardlinger might have been a better movie, but the opportunity’s still there since there are far more stories of happenstance and chance on the streets of Toronto. Plus, they still leftover cake!

The Death (and Life) of Carl Naardlinger opens Friday, July 13 at the Carlton.