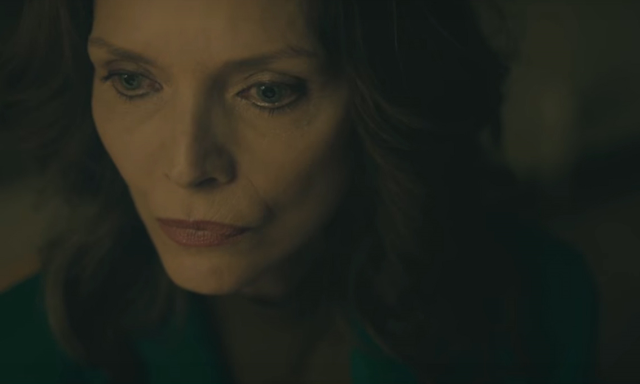 “I’m no spring chicken!” quips Kyra late in this film. She struggles to get work two years after losing her job, at which she was supposedly quite successful, and now she toils the demoralizing grind of unemployment. Few people, unfortunately, want an overqualified woman with wrinkles on the payroll. Pfeiffer dives deeply into this character study that demands every inch of her maturity as an actress. It’s a quietly powerful and immersive performance—one of Pfeiffer’s most surprisingly turns and arguably one of her strongest.


This deceptively simple film casts Pfeiffer as Kyra, a woman stripped of her ability to smile and enjoy life by the unexpected turn of her fate. She scrapes the barrel handing out résumés for jobs that high school kids could do, settling far beneath her skill set when she should be readying to retire. Kyra lives with her mom, Ruth (Suzanne Shepherd), in a drab and dark apartment that sees little joy or warmth. Taking care of Ruth might not be glamorous, but it gives Kyra purpose and she’s a decent caregiver from the action one sees in the drawn out observational scenes that writer/director Andrew Dosunmu presents.

However, when Ruth dies suddenly, Kyra kicks into fight or flight mode. Pfeiffer masks Kyra’s unhappiness with a brave face and carried self-assurance. She remembers the tips from her high school careers class and displays all the dos and don’ts job seekers glean from LinkedIn. Yet there is tragic vulnerability to Kyra’s desperate smiles. Without her mother, without a family, and without a job, she realizes that her life has no identifiable purpose.

Kyra gets a few lucky breaks, though, when a handsome stranger at the bar (Kiefer Sutherland) comes to her aid when she can’t pay her tab. The natural warmth of Sutherland’s screen sharpens the glow of Pfeiffer’s cold and enigmatic turn as Kyra remains guarded, as closed off as her dank apartment, when Doug invites intimacy and connection. (People skills aren’t Kyra’s forte.)

Break the second comes in the form of a pension cheque, made out, as always, to Ruth. It might not be much, but it’s something, so Kyra’s desperation drives her to cross the point of no return. She impersonates her mother to cash the incoming cheques. The feebleness with which Pfeiffer carries herself as Kyra dons her mother’s clothes and shuffles about with her cane is a heartbreaking reminder of this woman’s own fragility.

Kyra’s desperation is difficult to watch, yet it’s compelling as Dosunmu and Pfeiffer completely nail the emotionally exhausting grind of unemployment. There are few feelings quite as hellishly awful as putting oneself on the line day after day only to face a constant cycle of rejection. Pfeiffer’s understated turn captures the pain of being chronically unemployed as she personifies is a soul-crushing emptiness that comes with the realization that it makes little difference to anyone if you get out of bed in the morning.

Dosunmu keeps viewers at a distance from Kyra, favouring long lingering shots of cold shadows. Cinematographer Bradford Young opts for palettes of unrelenting bleakness as if the camera and Pfeiffer have an unspoken agreement never to smile. Dosunmu's style makes for demanding viewing, and one has to do a little soul searching when one's life is as dark as Kyra's is. The obtuse compositions of Where is Kyra?, while painstakingly framed, don’t let one get close to the subject, but they often obscure the greatness of Pfeiffer’s performance, too. Where is Kyra? could be an even better showcase for Pfeiffer if Dosunmu and Young simply offered more shot variety to emphasize the drama, rather than the dire surroundings, and let the actress shine. Every shot is awful in its own particular way and the dark shadows of Where is Kyra? overwhelm the film just a bit too much.

There are moments, like Kyra’s “no spring chicken” speech, when the director and cinematographer take more interest in Pfeiffer’s face than in her character’s wood panelling. The most potent drama of Where is Kyra? plays out on Pfeiffer’s face and it’s in these scenes that the film has is shattering in with power that recalls Kristin Scott Thomas’s own age-defying reinvention in I’ve Loved You So Long. It seems that the team doesn’t quite grasp what they have on the hands with Pfeiffer and that’s a shame. Perhaps only Pfeiffer appreciates the unspoken irony of the film as she plays a woman in her golden years that nobody knows what to do with. It’s odd to call Where is Kyra? a comeback, but Pfeiffer doesn’t care if she’s a spring chicken. She’s still laying golden eggs.

Where is Kyra? is now available on home video after being unceremoniously dumped in Canada without so much as a theatrical release or festival run.