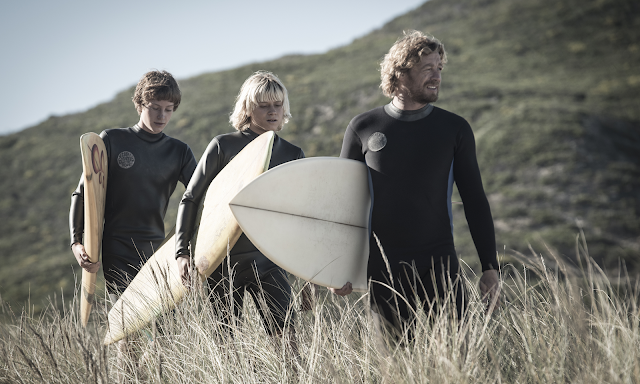 Adolescence feels a lot like being underwater. It has a certain murkiness and it takes a lot of feeling one’s way around to find direction. Add the feeling that time works against you while struggling to navigate this uncharted territory: there’s only so long before going up for air. This sense of suffocation, of life closing in on you the deeper you get, becomes more turbulent as the waves crash down and send you tumbling.


On the other hand, there is great freedom to be found on the water. Pikelet, played by Samson Coulter, comes into his own on the waters of the Sydney Coast and gains confidence by conquering the stormy waters with his surfboard. Alongside his rambunctious best friend Loonie (Ben Spence), Pikelet finds his footing by mastering a surfboard and riding the waves of adolescence. Breath evokes the slice of life magic of Andrew Cividino’s Sleeping Giant with its coming of age tale. Actor Simon Baker makes a respectable directorial debut with Breath by offering a compelling story that thrives on the exciting and unpredictable waves off the coast of southern Australia.

The Aussie actor adapts the novel of the same name by Tim Winton and Breath finds its power in the intimate connection between its characters and the landscape. Baker shows a strong hand directing Coulter and Spence as the two young leads while acting alongside them as Sando, the freewheeling surfer who teaches the boys how to take control of the waves and, in turn, their destinies. The violent unpredictability of the waves makes for some intense—and impressively realized—sequences on the water, which Baker shoots with an adrenaline-pounding thrill with cinematographers Rick Rifici and Marden Dean. Boys will be boys and the trio of surfers has boisterous fun as they harness the untamed power of the waves, finding their own as they ride the pipes cautiously, then confidently. The same goes with Baker's hand as a director as Breath slowly takes one by surprise with its smartly symbolic journeys on the surfboards.

While the stormy waters provide visceral metaphors for boys’ fight to stand out from the pack, life on the land is just as unpredictable. Spence gets boyish thrills from playing chicken with heavy trucks that speed along the windy highway, while the lessons of surfing teach Pikelet to be braver and more sensible. Unlike Spence, Pikelet reads the signs in his environment and reacts accordingly, whereas his friend boldly presumes to have power over the elements around him.

Pikelet’s observant curiosity leads him to another turning point in growing up as he grows close with Sando’s hippie girlfriend Eva, played by Elizabeth Debicki from The Great Gatsby. Debicki has an organic screen presence that elevates a character who could easily serve little function other than to further male desires. Eva mopes around her surfer hut, tending to a broken leg, and she teaches Pikelet to take risks and embrace the thrill of living in the moment but to do it smartly. Youth isn’t something to waste, but adulthood isn’t much fun if, like her, one mostly lives it from the sidelines.

Breath doesn’t rush Pikelet when it comes to feeling out his environment. Baker unfolds the drama at a fair pace, letting it linger when it needs to and quickening it when the thrill of the waves (or Eva’s legs) set the boy’s pulse a-pacing. Coulter’s measured and thoughtful performance lets audiences spend time in Pikelet’s head and experience the frustrations of feeling like an ordinary part of the crowd and, eventually, finding peace in the realizing that all waves are part of the same ocean. Some just come crashing down harder than others do. Riding the wave is all part of growing up.