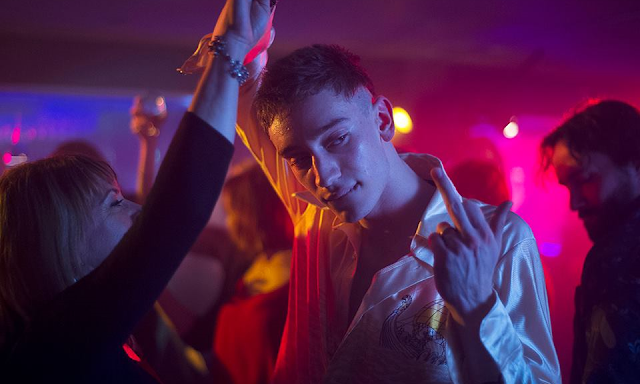 Telefilm Canada threw us all for a loop Wednesday when they announced, without the usual warning or fanfare, the completely random selection of Sophie Dupuis’ Chien de garde as our official submission in the Oscar race for Best Foreign Language Film. It’s a random choice because Chien de garde marks the first time in a very long while that the pan-Canadian committee has put forward a film that had virtually no boost, platform, or exposure outside of Quebec. The film, which opened theatrically in La Belle Province in March and was dumped unceremoniously onto VOD for the rest of Canada sometime between then and now, actually drew some stellar reviews and garnered three of Quebec’s Iris Awards in the categories of Best Actress (Maude Guérin), Best Film Editing, and Best Breakthrough Performer. (The film has a full-throttle performance by Théodore Pellerin).

A nitty gritty family drama set in the world of petty crime and featuring a roster of actors performing as if each one is in a different film, Chien de garde is bold, but all over the map. Dupuis introduces herself as a filmmaker who is willing to “go there” as she displays an ambitious hand behind the camera in this volatile family drama. Chien de garde stars Jean-Simon Leduc as JP, a young man who works as a debt collector for his cartoonish crooked uncle Dany (Paul Ahmarani) in Montreal’s working class neighbourhood of Verdun. JP’s 19-year-old brother Vince (Pellerin) is his far-too-eager apprentice, who has countless energy to burn while roughing people up and making sure folks pay one way or the other.

JP’s desire to be good and go straight sparks Vince’s wild side and the untrained young man becomes like a Tasmanian devil/mobster twink of OCD fury in the family home. Vince twirls, caresses his tattoos, and mopes about in his undies while he shouts, drinks, and riles up everyone, particularly their troubled mother (a strong Maude Guérin) who suffers from depression and battles with the bottle. He seduces and alienates everyone with flamboyant, over-the-op affectations, but nobody’s really buying the routine.

Deep down Vince is a sad little pup, longing for acceptance from his family and helpless in his search for authority figures. Vince has an attachment to his mother that might even make Xavier Dolan gag as the young man cuddles up to his mom in bed every night, and in one case proudly announces his morning boner to world as she sleeps beside him, yet he turns on her violently when what she needs most is a hug. Chien de garde is virtually all about Pellerin’s performance as he unleashes a bold dramatic energy that takes hold of the camera and never lets go of it. His work drew comparisons to Robert De Niro’s breakout performance in Martin Scorsese’s Mean Streets when the film opened in Quebec, and rightly so, and it will be the thing that makes or breaks the film for most, if not all, viewers. It is a wild, dynamic, and boisterous cocktail of passion, aggression, loneliness, ambiguous sexuality, and raw vulnerability—but some might find it exasperating. Pellerin’s been making a name for himself in Canuck flicks like It’s Only the End of the World, Boost and Never Steady, Never Still, and will gain far more notice in Joel Edgerton’s gay conversion drama Boy Erased, and Chien de garde boldly announces him as one of Canada’s next stars.

Pellerin overwhelms the film, though, despite Dupuis’s best efforts to capture the finer details of Guérin or Leduc’s performances in shots that linger after the actor’s unbridled energy has left the frame. There’s an overall unevenness to the film as Dupuis negotiates her star’s performance with everything else around them. Handheld camerawork jitters a bit too self-consciously as the action follows Vince’s reign of terror, while issues of pacing abound in a story that never quite goes anywhere.

Dupuis captures the nitty gritty of the neighbour as she shoots the characters’ surroundings with an eye for hardship, violence, and poverty. Chien de garde is a sobering portrait of working class survivalism told in kitchens, dive bars, and back alleys. It’s a bleak and difficult film, but one that also rewards with the freshness and roughness of its approach to a corner of Montreal we haven’t quite seen before.

Chien de garde is a respectable, if flawed, debut feature for Dupuis as a director, but this Canadian film fan and Oscar junkie doesn’t have much confidence in its likelihood to go the distance. Its selection makes no sense from a strategic perspective. The film lacks the zip, gravitas, and accessibility of Denys Arcand’s return to form The Fall of theAmerican Empire, which seemed like a no-brainer as the frontrunner selection last week after playing to strong reviews at TIFF with awards heavyweight Sony Pictures Classics handling its US release. If we were sending the best eligible film, then Robin Aubert’s blood-soaked zombie flick Les affamés (bought by Netflix in the States), would have been not only an audacious choice, but also a worthy one since it’s the best film out of Quebec since Xavier Dolan’s Mommy.

For an urgent portrait of young Montrealers Pascale Plante’s Fake Tattoos is more accessible and profound. The Fireflies are Gone, Sebastian Pilote’s unexpected but worthy winner for Best Canadian Feature at TIFF, might have been a safer choice with its slice of life realism and outstanding performance by Karelle Tremblay. Even Sadaf Foroughi’s Ava would have been a bold choice—but also a smarter one since it actually had a chance to connect with broader audiences in theatres and in festivals.

I don’t like to review a film within the frame of its awards potential, but that’s now the discussion within which most people will see Chien de garde. It’s a decent film, but hardly an Oscar-worthy one.