First Man: From the Space Race to the Oscar Race 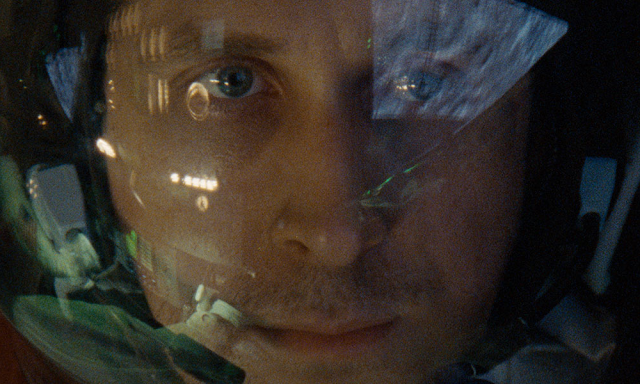 Neil Armstrong might have been the first man to walk on the moon, but we’ll all feel like we’ve been there after seeing First Man. La La Land director Damien Chazelle takes audiences to the moon with such heart-pounding skill that one could swear he shot the film in space. This technically accomplished achievement chronicles the landmark Space Race that culminated with the Apollo 11 landing on the moon with Armstrong (played by La La Land leading man Ryan Gosling) taking a major leap for all of humanity.


First Man might seem as far from La La Land as Earth is from Pluto, yet Chazelle’s follow-up to his hit Oscar winner/Oscar loser is also about those who dream. The film focuses not so much on the story that everybody knows and the narrative that history books tell. First Man shows the grit, the risks, and the fearlessness of the astronauts who pioneered space exploration and it lets audiences feel the sense of victory they must have collectively experienced when the first foot finally touched the ground. First Man is also about Armstrong’s wife, Janet (played by The Crown’s Claire Foy) just as much as it is about the astronaut. The omission of Janet’s name from the film’s title paints her as an unsung hero and First Man gives Mrs. Armstrong ample credit for the sacrifices she made while supporting her husband in his endeavours and worrying that any mission could be his last.

The film thrusts audiences into the Armstrongs’ lives as the Space Race between the USA and Russia ramps up. Chazelle introduces Armstrong with a mid-flight daring-do that foreshadows his sharp mind as when his aircraft reaches too high into the atmosphere and loses control to the point where he can barely correct its balance. Mistakes, even near-mistakes, like this one are fatal, and even approaching the edge of a multi-million dollar screw-up puts Armstrong’s place in the program at risk. When Armstrong returns home, he walks into another race against time as his two-year-old daughter Karen battles a brain tumour. Tensions are high, both at NASA and in the Armstrong home.

Karen’s early death inspires Armstrong to return to work and explore the great beyond. As played by Gosling in one of the actor’s most reserved and nuanced performances, Armstrong is a quiet man, visibly broken by the loss of his child but unable to express his grief in the way that all-American males prefer to suffer in silence. As Armstrong throws himself into his work, and undergoes rigorous training that Chazelle depicts in head-spinning, stomach-churning detail, Karen’s absence underscores much of the film. The pain of the lost child doesn’t go away, and Foy is especially strong in this regard as Janet provides the proverbial glue holding the family together—even, most painfully, when she instructs Neil that he can’t go fly to the moon before he sits down with their sons and tells them that he might not return. Janet doesn’t resolve to sit passively and watch her family dissolve, and Foy does great justice to a part that’s been underwritten in far too many films.

Screenwriter Josh Singer, who so delicately wove the loss of a child into Denis Villeneuve’s haunting sci-fi mind-bender Arrival, drives First Man with the constant cycle of death that hangs atop the Space Race. Fellow astronauts die like characters in a teen slasher film, picked off in reverse chronological order of the actors’ billing as the limits of science can’t keep pace with the speed of human endeavour. The team, the Armstrongs, and Americans more broadly ask themselves repeatedly if the quest to explore space is worth the sacrifice. With the weary, reserved expression that Gosling wears on Armstrong’s face when the astronaut’s colleagues are grinning ear to ear, that sacrifice is clear. Having already lost a child, Armstrong gives up ample family time in order to further humankind’s desire for answers.

The final act in which the fateful mission happens is particularly effective. From the nerve-wracking moments as Armstrong guides his spacecraft above the moon’s craters while Buzz Aldrin (Corey Stoll) watches the fuel gauge tick down to zero, First Man puts audiences inside the headspace of these heroes who make sacrifices for the greater good. It’s gripping, thrilling, and inspiring. When the film touches down on the moon and Chazelle offers a look at the sandy surface from Armstrong’s point of view, it’s out of this world. (Sure, “the moon” is probably a beach in California or a soundstage in Hollywood, but no film has been so convincing in realizing outer space.) The film forgoes the expected emotional payoff of seeing the masses, or even the Armstrongs, enrapt by their television sets watching the mission unfold in the historic broadcast. Instead, Chazelle offers the words of the real Neil Armstrong as Gosling plays out the scene from behind his fancy space suit, raising his visor not to savour the victory, but to say goodbye to the child he couldn’t save. Underlying Armstrong’s pain is the sense that the limits of science prevented the doctors from saving Karen’s life: any pursuit to break the perceived limits of science might inspire other minds to expand their horizons.

Chazelle’s impressive realization of the trip to the moon highlights some outstanding technical work from his La La Land collaborators, most notably cinematographer Linus Sandgren, who favours the claustrophobic intensity of the ride and huddles the camera into every nook and cranny of the set to capture Gosling and Stoll while they sweat. The music by Justin Hurwitz offers an innovative mix of classical and obscure instruments, playing the soundscapes of the Space Race with theremins and synthesizers to capture the feeling of exploring the unknown. Audiences expecting a big emotional payoff won’t find a rousing moment of glory, but First Man does Armstrong the better by acknowledging his accomplishment in terms of what it meant for his family and all humankind.

I don’t envy any film that imagines outer space after Gravity let us float through the eye-opening grandeur of the final frontier, but with First Man, Chazelle provides a worthy successor to Alfonso Cuarón’s thrill ride. Even though I knew the outcome, I was holding my breath the entire time.