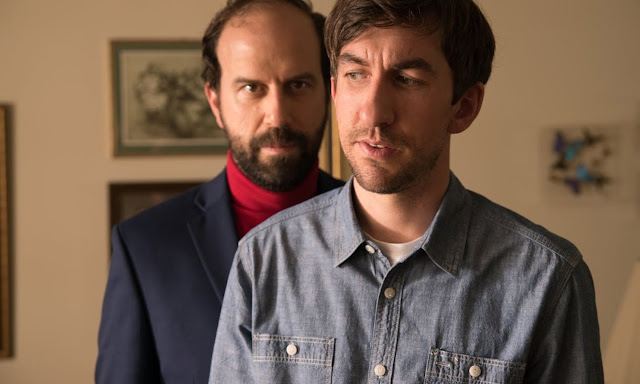 Living with random roommates is an experience that everyone should face at least once, if only to appreciate how normal and kind one’s friends and family are. For example, when I moved to Toronto, I answered a Craig’s List ad for a house that was led by someone who seemed perfectly chill and relatable. She turned out to be a batshit crazy hoarder who cleaned the shower for an hour every week (usually at midnight) and ran an amateur massage studio out of our messy living room—an expected everybody to vamoosh when her clients arrived. Not the most pleasant year, but it gave some perspective.

The trope of the roommate from hell gets a humorously awkward spin in Room for Rent, this week’s cheap Canadian movie opening at the Carlton. It’s a two for one combo of terrible roommies, actually, since the film’s star Mitch (Mark Little from Mr. D and Roller Town) is actually a roommate-from-hell in his own right. Mitch lives with his parents well into his 30s, as many sad sacks of Canadian cinema do, and he marinates in the notoriety of being a small town boy who won the lottery and squandered his money on trinkets and half-baked inventions. Mitch doesn’t contribute to the home on any level and expects his mom, Betty (Stephnie Weir), to pick up after him while his dad, Warren (Mark McKinney) brings home the bacon. However, when Warren loses his job and decides that it’s time for Mitch to get a job, the manchild has a brainwave: clear out all the junk from his lottery winnings vault and put up a “room for rent” sign.

A prospective tenant, Carl (Brett Gelman), appears in a flash and seems practically perfect in every way. Carl is like the son that Warren and Betty always wanted. He works, he’s polite, he’s tidy, and he gets out of the house every now and then. A rivalry ensues as Mitch falls from being the favourite of his parents’ affection, although he presumably only was by default. As Carl incessantly works his way into the family’s fabric, including planning an extravagant retirement party for Warren and enlisting Mitch’s ex-girlfriend from high school (Carla Gallo) to do so, Mitch pushes back to discover the truth about Carl. Cue a stink bomb, a leaky waterbed, and some life-changing revelations.

Little and Gelman have a lot of fun creating the bitter feud between the two roommates. Gelman is amusingly creepy playing Carl like a psychotic Mary Poppins. Little plays a downbeat and disaffected anti-hero who recalls a young Don McKellar, although both Mitch and Carl could easily fuel a storyline on Twitch City. They create a weird dynamic akin to sibling rivalry as the two adult-aged boys antagonize one another, playing sweet angels whenever the parents are around and being petty doofuses whenever they’re absent.

Room for Rent never goes for big laughs, but the modesty of the film’s humour lets writer/director Matthew Atkinson keep an even hand on the film’s purposefully awkward tone. This is one of those movies where audiences are more likely to cringe than let out a belly laugh, if only because they’ve all been there. And with housing prices as prohibitively expensive as they are, we’re all likely to be there again.

Room for Rent opens in Toronto on Oct. 26.