EUFF Review: 'I Am Not a Witch'

I Am Not a Witch
(UK/France, 92 min.)
Written and directed by Rungano Nyoni
Starring: Margaret Mulubwa, Henry Phir, Nancy Murilo 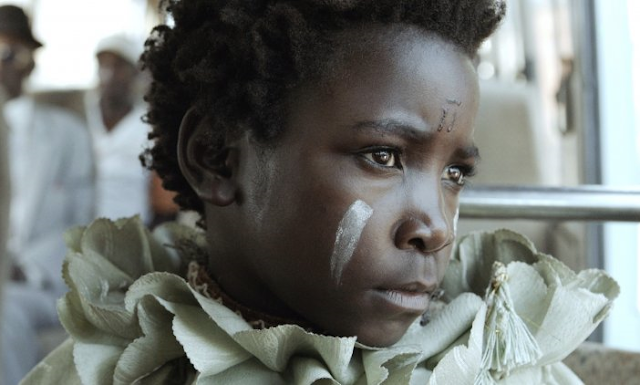 The inciting event of I am not a Witch could easily be a scene from Monty Python and the Holy Grail. A woman fetches a bucket of water and drops it when she encounters a young girl on the path home. Her explanation for being startled? The little kid’s a witch.

Short of throwing the poor girl into the water and seeing if she floats, the alleged witch, played by remarkable newcomer Margaret Mulubwa, is forced to stand trial in an impromptu circus. People from way all over come to see the show. The gawkers join in, offering the police officer accounts of the girl’s sorcery. The girl simply stands silently, clearly overwhelmed by the ordeal, and neither confirms nor denies that she’s a witch.

In the absence of any hard evidence confirming the ludicrous testimony of the trivial affair, the court calls upon a bona fide witch doctor who administers a test. Upon a killing a chicken, if the bird dies in a circle drawn on the floor, then the girl’s a witch. The flying circus roars and the poor girl soon finds herself in a coven in the desert, which is really just a forced labour camp for marginalized women. The girl, dubbed “Shula” by her fellow “witches,” moves around the fields attached to a ribbon is advised that any attempt to escape will render her into a goat. She’s a slave of an occult variety.

Shula’s fate becomes increasingly peculiar as a government official, Mr. Banda (Henry Phir), exploits her as his personal slave. This poor girl—remember, she’s only eight years old—must play judge and jury to various sham trials akin the one that determined her fate. Endowed by the masses with utterly bogus sage wisdom, Mr. Banda lets Shula render verdicts on petty thefts and other misdemeanors simply by seeking her gut feeling. She’s basically playing “eenie meenie miney mo” with the fates of villagers who believe in the power of witches. I am Not a Witch sees the affair spill out into layers of oppression as women and the poor become slaves to rhetoric and have their own folklore and beliefs used against them for the gain of a powerful few.

Newcomer writer/director Rungano Nyoni offers an enigmatic portrait of a peculiar scenario. She examines the charge of witchcraft from a personal, rather than political level, keeping the story of the reluctant witch on the level of myth as the tale sees the poor girl exploited as a tool against the masses. I am Not a Witch doesn’t need to get explicitly political, either, when it presents such a compelling and empathetic innocent as the target of an unsavoury curse. Mulubwa is a wide-eyed miracle of a young performer.

Nyoni proves herself a natural behind the camera, too. I am Not a Witch, which is the UK’s adventurous bid in this year’s Best Foreign Language Film Oscar race, is one of the most original films of the year. The director’s intuition creates a beguiling, mysterious atmosphere that conveys a wealth of information about the dynamics of class, race, and capital through unpretentiously devised scenarios and characters. Her sense of style is a marvel with the white ribbons that imprison the witches blowing in the wind like currents of power and control, brutal weapons in their innocence and familiarity. Nyoni’s trust in Mulubwa to carry the film is a gamble that rewards. She barely says a word throughout the film and moves about the hellish scenario dumbstruck, letting the fear, anger, confusion, and defiance cast a spell over a viewer to draw them into Witch’s brew. I am Not a Witch is a simple fable of great power.

I am Not a Witch screens at the European Union Film Festival in Toronto on Nov. 21.
Please visit EUFFTO.com for more info on this year’s festival.