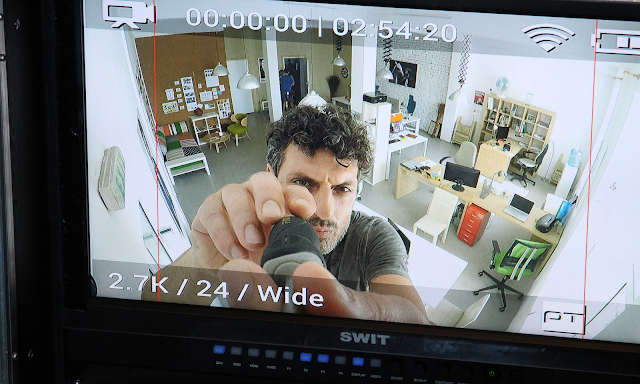 How many cameras does a person walk by every day? The fear of Big Brother watching over us is a reality that people take for granted. Government spying might be one thing, since they can only monitor so many people, but the threat of surveillance is everywhere, as are the inherent elements of power and control that come with the information gleaned by the voyeur. Omnipresent, the opening night film of Toronto’s European Union Film Festival and Bulgaria’s official entry in this year’s Oscar race for Best Foreign Language Film, explores the destructive role of the panopticon as one man takes the all-seeing eye of the camera too far. It’s a chilling morality play on the power of media.


The downfall of Emil (Velislav Pavlov) is evident from the outset of Omnipresent. He sits behind his laptop and clacks away his confession on the keyboard. Lives have been ruined. Reputations have been tarnished. Trust has been violated. Emil admits to breaking many social barriers in an experiment that ran wildly out of control.

He explains that it began innocently, since the disappearance of precious items from the household of his bedridden father prompted him to install a small surveillance camera. However, the camera provides a level of intimacy between the father and son. Even Emil’s mother doesn’t know about the little lens that connects the family from afar. Emil enjoys seeing his father in his final days, and he realizes how much a person can learn about others when they act without any self-consciousness.

Emil expands his little CCTV network across his house and workspace. He soon has oodles of fresh information, like personal details about Maria (Vesela Babinova), a love interest at work; his wife’s (Teodora Duhovnikova) budding lesbian love affair, and the fact that his father-in-law (who hates him) routinely pees in the bathroom sink and screws the cleaning lady. Information is a powerful tool and Omnipresent creates a plugged-in monster out of Emil and his network. He grows at home and at work, using information shared in private to one-up his co-workers or to make himself appear a perfect match for Anna, parroting things she says in passing to colleagues. Everyone loves how he seems to be on the right brainwave, anticipating their wants and needs while saying all the correct things and making all the right moves.

Omnipresent shows how easily a person like Emil can fall into the trap of hyper-connected power. Each escalation of his invasion into the private lives of others seems plausible and writer/director Ilian Djevelekov includes ample documentary-style surveillance footage to keep the drama rooted in reality. So too is the eventual spiralling out of control of Emil’s operation, since information—particularly the secrets contained in videos—often eludes damage control once it goes viral and can’t be contained.

The film presents a bit of a challenge for audiences since Emil is often difficult to like and one might find it hard to sympathize with his self-serving intentions. People don’t breach such sacred bonds of trust for noble reasons, though, and Omnipresent often works because it presents the audience with the normalization of deviant behaviour enabled by modern technology. The film is unsettling because it reminds audiences that technology and surveillance are pervasive realities. Omnipresent is an effect moral fable, 2.0 style.


Omnipresent screens at the European Union Film Festival in Toronto at The Royal on Thursday, Nov 8 at 8:30 PM and at the Ottawa EUFF on Monday, Nov. 19 at 7:00 PM.