'The Drawer Boy': From Stage to Screen 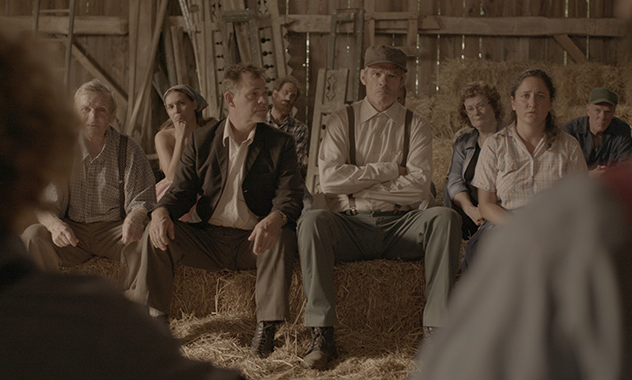 The Drawer Boy is a contemporary classic of Canadian theatre and the film adaptation could enjoy similar esteem. This stage-to-screen take on Michael Healey’s acclaimed play is a refreshingly vibrant drama. Some audiences might find the adaptation a bit too talky and a bit too stagey, but stick with it. The Drawer Boy is a sparse, small-scale affair smartly told that takes the bare essences of good filmmaking—a good story, strong actors, and a sense of cinematic space—and bundles them together like a sturdy bale of wheat. It’s nice to have a Canadian film to get excited about again.


The film, like the play, centres on a trio of characters and the fields of drama that secrets sow. Miles (Jakob Ehman) arrives at a farm outside the Podunk town of Clinton, Ontario circa 1970 and he offers a modest proposition to farmers Morgan (Richard Clarkin) and Angus (Stuart Hughes). Miles, a city slicker from a Toronto acting troupe, wants to write a play about farm life and hopes that Morgan and Angus will let him research their daily chores and habits. The men agree since they could use an extra hand for their labour.

Miles, being the artistic type, is not suited for manual labour. A minor accident leads Angus running for some ice cubes to soothe Morgan’s pain, but, in a jarring moment, the man freezes in the kitchen, lost in thought. He returns with some cough syrup. And does so each time Morgan asks for ice. Angus must have Alzheimer’s or dementia, one can guess from the look on Miles’s somewhat bewildered face as he watches Morgan patiently endure a routine that is obviously familiar.

The more Miles observes the two friends, the more material he finds for a great story. Storytelling, see, is at the heart of the relationship between Morgan and Angus. It ultimately unites and divides them. Miles discovers the significance of storytelling in their friendship as he overhears their tales and appropriates them for his play without permission but with ample dramatic license.

The act of storytelling reveals Morgan to be both Angus’s protector and his captor. He hypnotises Angus with the story of “The Drawer Boy,” a stand-in for Angus himself who was injured in a freak accident during the war and lost many cognitive skills including memory. (He is, however, a whiz with numbers.) The tale of “The Drawer Boy” provides Clarkin with a rich monologue. He navigates the vicissitudes of the friends’ fortunes and takes his pal through a yarn of ironies and cruel fates as Angus learns of love found and lost during the war. Angus, however, also finds a happy ending in the friend who stands by him through thick and thin. Told with theatrical flair, the key monologues of The Drawer Boy draw out the best of film’s theatrical origins as the story shifts loyalties and allegiances, both within the characters themselves and between the audience and the characters, through each act of telling as the monologues draw viewers into the characters’ rich psychology.

The Draw Boy also harnesses its dramatic origins to its advantage during these sequences. Theatrical lighting conveys Angus’s shifts in consciousness as spotlights remove him from reality and buoy him in the dreamy connections he feels for his long lost beau Sally. Hughes conveys through silence what Clarkin wields with words and The Drawer Boy creates a unique interplay between film and theatre during this sequences that embellish the story within the story. Ehman rounds out the trio of strong performances by bringing a tighter style of acting that caters to the camera lens and contrasts nicely with Clarkin’s work that is more theatrically inclined. While Miles is the actor, Morgan is the one putting on a show.

The story of The Drawer Boy also sits nicely within a tradition of Canadian drama as it observes country life with a peculiar eye. Miles’s farm show calls to mind the classic NFB documentary Paper Wheat, which tells of an acting troupe touring rural Saskatchewan and making plays about harvests and cows and is undoubtedly some inspiration for Christopher Guest’s Waiting for Guffman with its folksy slice of life humour. What the actors in Paper Wheat and The Drawer Boy (and, admittedly, Waiting for Guffman) share is an affinity for experimentation as thespians tumble through the fields and try to find a way to represent rural life—yet ultimately exploit it along the way. The Drawer Boy refreshes a tale about the power of storytelling in preserving and perverting history, of revising it for the winners and revisiting it in the years that follow. As this adaptation shows, it’s a story that can endure through the art of retelling, restaging, and re-imagining.

The Drawer Boy opens Nov. 23 at the Carlton and streams soon on Highball TV.

The Drawer Boy - Trailer from Open City Works on Vimeo.