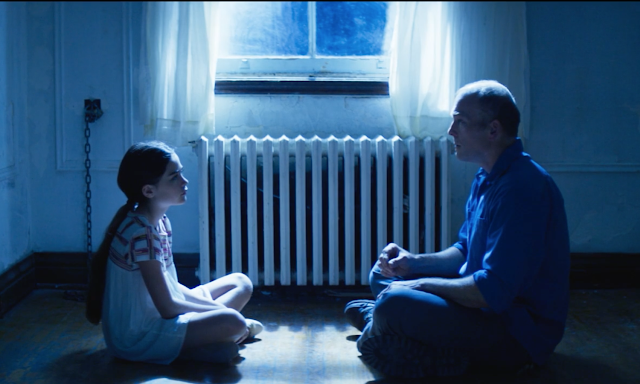 Director Karl R. Hearne really seems to like the colour blue. It’s everywhere in his new feature Touched. It’s in the lighting (so cold!), the clothing (so sad!), and the mood (so dreary!).

Touched is this week’s cheap Canadian movie opening at the Carlton, and it’s a fine ticket for everyone who loves the drably composed and awkwardly staged indies that pass for theatrical Can Con these days. Maybe it’s just an unfortunate bit of timing, but Touched really makes me nostalgic for the days when I wrote about Canadian movies out of excitement, rather than obligation.

It’s hard to get excited about yet another micro-budget indie about a poor loser struggling to find his place in the world. Hearne, who wrote, directed, edited, and produced this film on his own, has some good ideas, but they would have been exponentially better with some key collaborators refining them along the way. There isn’t a theatrical feature to be found in Touched. Even at a sparse 77 minutes, Touched feels like a short film stretched to feature length for no conceivable purpose.

The story centres on Gabriel (Hugh Thompson) who works as an apartment superintendent and is plagued by traumatic memories of a deceased tenant named Caitlin. The anti-hero goes through the same routine of reality and nightmares every day with blue-hued interludes providing tea parties with a young girl (presumably a little Caitlin) who is chained to wall. It becomes increasingly apparent that his confident Caitlin might just be a figment of his imagination. Thompson has little screen presence, offering a poor man’s Jackie Earle Haley, and the script gives him very little to work with. He stands there and flares his nostrils every now and then. The apartment walls are more dynamic.

The problem is that it’s hard to care about why Caitlin haunts Gabriel or wonder why he flows in and out this purgatorial hell. Touched is one of those movies where scenes and lines of dialogue repeat themselves over and over. Each recurrence, however, betrays the film’s thinness and Gabriel’s plight becomes increasingly malnourished as the story recycles a handful of bland images and exchanges. Sure, the colour palettes change as Gabriel paints the apartment as a manifestation of his inner turmoil, but the film also becomes hollow as eccentric characters appear like a peanut gallery of Twin Peaks rejects.

The well needs water, though. As a character study, Touched isn’t interesting and as a horror movie, it isn’t chilling. Touched isn’t an especially bad movie. It is clearly a labour of love from Hearne, but one that needs a lot more support and resources to come to fruition. However, it embodies everything that is broken with Canadian film at the moment as we all collectively champion mediocrity in the ongoing cycle of sub-par movies playing one-week theatrical runs in order to satisfy their funding requirements. There are few truly great and innovative, exciting, original films that justify the theatrical experience in Canada these days and even fewer making it onto screens outside the festival circuit, and films like Touched aren't products for a sustainable future. I would feel like an outright liar giving this film a recommendation.

There’s an ongoing argument in Canadian film that says buying a ticket is like voting at the box office. Demand better and decline your ballot.