It pretty much sums up 2018 in a nutshell by saying that my two favourite films of the year are the Mr. Rogers documentary about the value of kindness and the movie where Nicole Kidman mercilessly beats the shit out of everyone. What a mood.

Labels: a star is born, birds of passage, blackkklansman, destroyer, isle of dogs, roma, Suspiria, the favourite, won't you be my neighbour, Year in Review

2018 in Review: The Best Performances of the Year

2018 might not have been a so-so year for movies, but it’s hard to find a year with a stronger list of acting credits. The films of 2018 excelled in large part by the quality of the performances that fuelled them. I could easily have limited the list of the top lead performances of 2018 to Best Actress contenders and still omitted worthy names if I capped it at 10. Not even Meryl Streep made the lists this year, the acting was so good!

Interview: Chatting with 'Birds of Passage' Director Cristina Gallego at 'That Shelf'

The team behind Embrace of the Serpent is back! After the 2015 arthouse hit and Oscar nominee comes Birds of Passage, an electrifying Colombian cartel drama directed by Cristina Gallego and Ciro Guerra. The film is Colombia's Oscar entry for Best Foreign Language Film and recently made the shortlist.

Birds of Passage gives drug wars a tribal spin by setting the drama in the land of the Wayuu clans in northern Colombia. “Since Embrace went well, it was very easy to finance this film,” said Gallego, speaking Gallego, speaking ahead of the film’s Canadian premiere at the Toronto International Film Festival. “It let us take the next step in the scale of film we could make. In Colombia, movies are usually pretty small because of financing.”

Read the interview at That Shelf!

Yorgos Lanthimos's period satire The Favourite leads the nominations for the 22nd annual Online Film Critics Society Awards. The organization, of which I am a member, is the oldest and longest running international group supporting film culture in the online sphere.

Labels: a star is born, if beale street could talk, OFCS, roma, the favourite

Every good superhero deserves an origin story. Ruth Bader Ginsburg, the cloaked crusader of 2018, gets her turn in the biopic On the Basis of Sex with a spunky performance by Felicity Jones (The Theory of Everything) charting her journey towards becoming a Supreme Court Justice and the meme-able “The Notorious RBG.” On the Basis of Sex is the second entry in the Ruth Bader Ginsburg cinematic universe of 2018 and while it’s a perfectly decent and timely film, it’s neither great nor essential viewing for anyone who saw Betsy West and Julie Cohen’s documentary RBG. The doc is not cinematic masterpiece, either, so an RBG reboot seems inevitable.

2018 in Review: The Best Canadian Films of the Year

It is harder and harder to see a Canadian film in a Canadian theatre these days. And I hate to say it, but many of the Canadian movies that actually find space on big screens are not good. However, there are some real gems in between the schlocky horror flicks, lo-fi comedies about thirtysomething males, and cheap Canadian movies four-walling a theatre simply to meet their funding requirements.

Vox Lux: A Tale of Pop Music, Tragedy, and Violence

"Out, vile jelly! Where is thy lustre now?"

"Out, vile jelly! Where is thy lustre now?"
-King Lear


Dick Cheney is a villain worthy of Shakespeare. The Bard deftly blended tragedy and comedy to comment upon the rulers of today and while Adam McKay might not be William Shakespeare, he certainly knows how to craft a bad guy. After skewering Wall Street, the man behind The Big Short takes aim on the White House and sends audiences back to the dark ages of the now- second worst administration in the history of the USA. George “Dubya” Bush is too easy a target though, and has already been picked apart by movies like the incendiary Fahrenheit 9/11 and the Bush-league Oliver Stone biopic W. Instead, McKay sets his sights on the junior Bush’s wingman, Vice President Dick Cheney, played in a deadpan performance by Christian Bale in a furiously funny film. Cheney is a man of many vices and McKay’s flick portrays him as a crafty, Machiavellian politician who was really pulling the strings throughout Bush’s reign of terror. Vice is an all too relevant satire when yet another idiot is running the show in 2018. 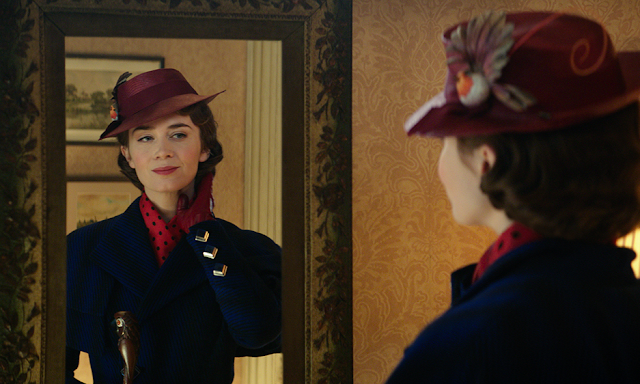 'Ben is Back' and Roberts Returns

Ben is Back
(USA, 103 min.)
Written and directed by Peter Hedges
Starring: Julia Roberts, Lucas Hedges, Courtney B. Vance, Kathryn Newton
Ben is Back might be the most depressing Christmas movie since It’s a Wonderful Life. But if there is a Jimmy Stewart in Hollywood today, his spirit endures in Julia Roberts’ infectious smile. Roberts is heartbreakingly good in Ben is Back playing Holly Burns, the devoted mother fighting to save her family with the same indefatigable goodwill that makes audiences cheer for George Bailey year after year. She gives one of her best and most surprising performances opposite Lucas Hedges (Boy Erased) in this engaging, emotionally draining, and ultimately rewarding portrait of addiction’s ability to tear families apart.

The Most Amazing Spider-Man Yet!

Spider-Man: Into the Spider-Verse
(USA, 117 min.)
Dir. Bob Persichetti, Peter Ramsey, Rodney Rothman; Writ. Phil Lord, Rodney Rothman
Starring: Shameik Moore, Jake B. Johnson, Hailee Steinfeld, Mahershala Ali, Brian Tyree Henry, Lily Tomlin, Kathryn Hahn, Kimiko Glenn, John Mulaney, Nicolas Cage
A few years ago, two-time Academy Award winner Sally Field described her experience playing Aunt May in one of the Spider-Man reboots, saying, “You can’t put ten pounds of shit in a five pound bag.” Unfortunately, that’s what far too many of these superhero movies try to do. Between putting lipstick on a pig and cramming poop into a sack, comic book movies often take themselves too seriously and forget why people are drawn to superheroes and crazy villains. Comics are great entertainment. They’re escapism and opportunities for anyone to dive behind the mask of a hero and have some fun while saving the world—and there’s nothing wrong with that.


Alfonso Cuarón's Roma is the best film of 2018 according to the Toronto Film Critics Association! The acclaimed Netflix drama won Best Picture and Best Director from the TFCA in a live vote held yesterday by film critics in the city of Toronto. Roma marks a deeply personal film for Cuarón following his special effects extravaganza Gravity, which won seven Oscars. The film is a portrait of two women in Mexico's Roma neighbourhood, a wealthy mother and her Mixtec housekeeper who cares for her children. Cuarón has called it a love-letter to the two women who raised him.

'The Go-Getters' and the Pigs of Hogtown

We’re not “nice.” We’re just nicer than people from the USA are, and they aren’t very nice to begin with. Like, really—have you ever been to Toronto? It’s colder than an outhouse in Whitehorse!

The Favourite: The Mother of all Catfights

The Favourite is a saucy delight. Buoyed by a trio of courtly wenches in award-calibre performances, this spirited portrait of the affairs of Queen Anne in 1700ish Britain is a darkly funny romp. It’s the cleverest take on All About Eve since Working Girl as social climbing strumpet Abigail (Emma Stone) seeks to dethrone her cousin, Lady Sarah Churchill, Duchess of Malborough (Rachel Weisz) as the Queen’s BFF. Both ladies cozy up to Queen Anne (Olivia Colman) and assure her that she’s the bee’s knees when all evidence points to the contrary. These mean girls have cruel intentions.

I completely forgot that the Golden Globe nominations come out this week so here’s a quick crack at them along with updated Oscar predictions. I’ve had a chance to see nearly all the contenders so far with Vice, Mary Poppins Returns, and Ben is Back rounding out screenings before the end of the week and the upcoming TFCA vote, so I’ve been a bit busy…stay tuned for reviews of The Favourite, Mary Queen of Scots, On the Basis of Sex, Stan & Ollie, Vox Lux and more!