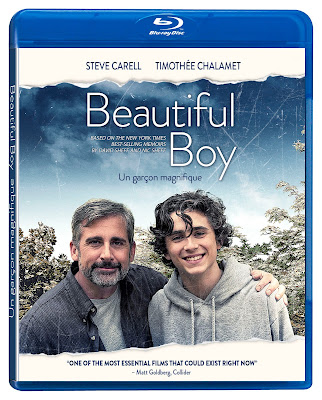 The Oscar nominations come out next Tuesday and you can expect Timothée Chalamet to be heading back to the ceremony this year. The Beautiful Boy star already has nominations under his belt from the Golden Globes, SAG Awards, and Critics Choice Awards for his powerful performance as Nic Sheff, a young man who shares the story of his battle with, and recovery from, drug addiction. (One of this blog’s picks for the top ten performances of 2018!) The film adapts Sheff’s memoir Tweak along with his father’s side of the story, Beautiful Boy, to show two perspectives on the devastating impact that addiction has on a family. Beautiful Boy comes to Blu-ray on Tuesday, January 22 from VVS Films and Cinemablographer has a prize pack to give away to celebrate Chalamet’s extraordinary performance! 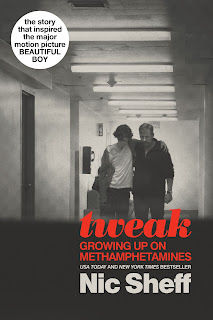 Synopsis: Beautiful Boy is a deeply moving portrait of a family’s unwavering love and commitment to each other in the face of their son’s addiction and his attempts at recovery. Based on two memoirs, one from acclaimed journalist David Sheff and one from his son, Nic Sheff. As Nic repeatedly relapses, the Sheffs are faced with the harsh reality that addiction is a disease that does not discriminate and can hit any family at any time.

Thanks to our friends at VVS Films, Cinemablographer has one Beautiful Boy prize pack to give away* featuring a Blu-ray of the film along with copies of the books Tweak and Beautiful Boy by Nic and David Sheff. All you have to do to enter is answer the following question:

Who is the director of Beautiful Boy?
a) Jean-Marc Vallée
b) Felix van Groeningen
c) Luca Guadagnino
d) Peter Hedges

Send your answer and full mailing address to contests@cinemablographer.com with the subject “Beautiful Boy.”