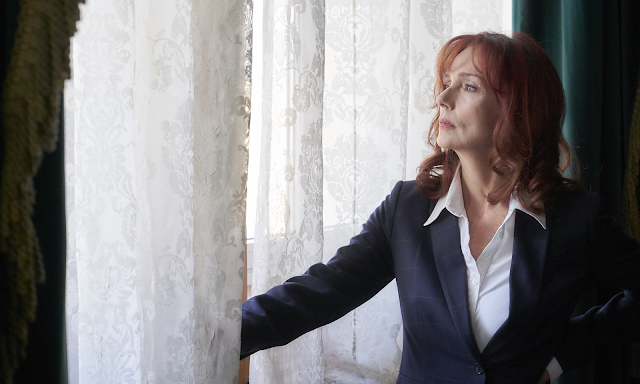 Robert Lantos may have produced In Praise of Older Women in 1978, but actor Jennifer Dale, Lantos's ex-wife, gives audiences a woman to celebrate in 2019. Dale is simply luminous in Into Invisible Light. Playing Helena, a recently widowed housewife and socialist with a newfound spark of passion, Dale creates an intriguing, full-bodied, and richly realized character. It’s one of those nicely fleshed-out and three-dimensional performances that mature actresses too rarely get to give in the movies.

While Dale brings many scenes to life, the film ultimately suffers from a listless, often meandering storyline as Helena searches for meaning and fulfillment in her life. Left alone following the death of her husband, Oliver, it doesn’t seem as if Helena has much to do. A random encounter with her former flame, Michael (Peter Keleghan), a successful-ish novelist, inspires Helena to rekindle her abandoned dream of being a writer. Michael, it turns out, quashed those aspirations shortly before their relationship fizzled, and the friends reignite some old sparks as Helena seeks to triumph over two intimately linked missteps from her past. When she finally takes the stage and shares her poetry, it turns out that she has a natural voice and a way for the written word.

In between Helena’s second wind and reawakening, however, are a few under-served storylines that struggle to flesh out the film and feel like filler. One subplot features Michael’s daughter, Monica (Jaydee-Lynn McDougall), as an aspiring dancer readying for a big scholarship audition. Another features Michael’s wife Lydia (Kari Matchett), who simply disappears for most of the film because she can’t stand living with a tortured artist. Then there’s David (Stuart Hughes), the business partner of Helena’s late husband, who presents something of love interest as they work together to execute a scholarship fund for the artists that Oliver saddled her with in his will. Even if the subplots never really work, one can see where and how they will converge.

A clunky score, dubbed “thoughtful piano music” by the screener link’s embedded closed-captioning, frequently pushes Helena back into the box of a suffering woman. (It’s that thudding kind of bargain bin temp music that doesn’t do a film any favours.) Into Invisible Light, at least from Dale’s interpretation, is really about Helena finally coming to life. There’s a glowing energy and confidence to Dale’s screen presence, especially in her scenes with Keleghan as Helena emerges from the silence that’s stifled her creatively and emotionally for far too long. The film also gets lost in some sporadic black-and-white interludes that feature Helena alone in her bedroom—dreamy vignettes that resemble perfume commercials. The low production constraints inevitably compromise the film’s higher meaning. And when one has a performance as good as the one Dale gives, there really isn’t any need to spray Chanel No. 5 with “thoughtful piano music” wafts through the air. Although the film itself isn’t especially great, Into Invisible Light is a ticket worth supporting if audiences want to see more Helenas and Jennifer Dales on the screen.

Into Invisible Light opens Feb. 1 in Toronto, Vancouver, and Winnipeg.