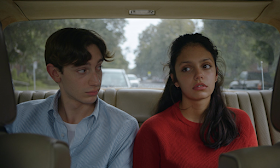 
Lesage doubles down on the promise of his dramatic debut The Demons with Genesis, his third narrative feature. Fuelled by cinematography that haunts with its lingering shots and jarring zooms, while an eclectic indie pop soundtrack radiates euphoria, Genesis delights the senses in exploring the boundaries of young love. Lesage returns with many of the same young actors who appeared in Demons and there’s a stirring sense of a new generation, a community, coming into its own. The aptly titled film demonstrates Lesage’s growth into a full-blown auteur since he’s upped his game in telling bold, challenging, and unconventional stories with an approach to filmmaking that breaks all the rules with unabashed defiance. Lesage references William Faulkner when describing his narrative style that shifts perspectives and defies conventional notions for story arcs and closure. It’s a fitting comparison, since Lesage’s film stands out with its refreshing interplay on temporality and points of view.

Genesis, like The Demons, features a jarring shift in perspective about three quarters of the way through the film, but the effect works brilliantly and delicately. I found the shift in vantage point to be infuriating and disorienting (if intriguing and mesmerizing) in The Demons, but the switch crystallizes the film this time around. It makes everything click and proves Genesis to be a poignant and dexterously crafted testament to the terrifying beauty young love. It also shows Lesage’s evolution as a filmmaker with a touching coda in which many viewers will inevitably recognize some aspect of themselves, if they haven’t already seen some aspect of their lives reflected on screen in the stories that come before.

Lesage offers two stories of adolescent longing as siblings Guillaume (Théodore Pellerin) and Charlotte (Noée Abita) experience love for their first time. Their stories unfurl in distinct storylines—one wouldn’t know they’re brother and sister aside from one or two scenes—as Guillaume explores curious feelings at his boarding school while Noée enjoys sexual freedom at home. Both siblings find themselves swirling in the awkward, confusing, messiness of love as they feel the spark for the first time. Guillaume finds himself awakened when he opens his eyes in bed one morning to the feeling of his best friend, Nicholas (Jules Roy Sicotte), cupping his butt while he sleeps. Charlotte, on the other hand, receives a proposal from her dorky boyfriend, Maxime (Pier-Luc Funk), channeling Larry David, who encourages her to strengthen their relationship by enjoying different sexual partners.

Lesage unfolds the two sweet-but-cruel love stories in a series of rhythmic episodes. Guillaume’s feelings grow across the course of his studies, some nights in the dorm, and parties with friends on weekends. In school, he’s the class clown as Lesage captures the young boy leading his comrades in rowdy rounds of singing or getting laughs from the room by pestering his history teacher (a perfectly cantankerous Paul Ahmarani) and treading the line of propriety with the English teacher (a humorously seductive Mylène Mackay). Outside of class, he’s shy and sensitive. The boisterous showboating Guillaume performs in the classroom is but a smokescreen. Like many Guillaumes we all knew in high school, his clowning around is a mask for his insecurity. He’s terrified to reveal his true self, especially since he is still figuring out who that is.

Charlotte, on the other hand, has fun in a cycle of dances at the local pub and sexy trysts with an older man (Jean-Simon Leduc). Her newfound beau gives her little emotional satisfaction and the awkward dates that Lesage devises for the couple demonstrate that Charlotte’s new guy is a total shit. He has no respect for women, while Charlotte finds herself toyed around, used, and neglected by various men throughout the short window into her life that Genesis views. When Charlotte is off with her friends and on the dance floor, one sees her come fully to life. Abita inhabits her character most thrillingly in the film’s dance sequences as Charlotte loses herself in the moment, embracing the space between youthful innocence and the responsibilities of adulthood.

If there’s one fault to make with Genesis, however, it’s one that often befalls films with multiple narratives. One story is simply stronger than the other is. In the case of Genesis, Guillaume’s story proves the more enigmatic and compelling of the two main narratives as the young boy confronts the many challenges and fears entailed in his first love. Lesage tasks Pellerin with a very poignant maelstrom of emotions to convey, and he creates a beautifully layered character that draws upon the young man’s youthfulness, vulnerability, rowdiness, innocence, boyishness, and sensitivity as Guillaume questions himself and confronts the truth. The centrepiece of the film is the scene in which Guillaume voices his love. It’s an unexpected scene as Guillaume bares himself during an oral presentation in English class—and the use of the second language for the Francophone actor is a remarkable device for conveying the character’s vulnerability—and gives a heartfelt monologue in which he recognizes a feeling deeper than friendship. “Something from the belly,” he calls it.

While it’s exciting to witness a new auteur director like Lesage come into his own with Genesis, the film is especially memorable for Pellerin’s captivating performance. Pellerin is on a hot streak after appearing in Canada’s Oscar bid Family First and the conversion therapy drama Boy Erased among other Canuck titles like Boost, Never Steady, Never Still, and Lesage’s Demons, but his performance as Guillaume is his most mature and assured performance yet. The work is every bit restrained and nuanced as his turn in Family First is appropriately over the top. He ensures that Guillaume’s bravery lingers in the film long after Genesis abandons the brother-sister duo and their adventures with love.

When the film cuts to another boy, Félix (Demons alumnus Édouard Tremblay-Grenier), who is shy and afraid to let love speak its name, the power of Guillaume exposing himself gives love a universal sentiment as another young man recognizes something new rumbling in his belly. This sequence plays out with an altogether different tone, pace, cadence, and atmosphere than the stories featuring Guillaume and Charlotte, but as Félix and his crush Béatrice discover new emotions in the blissful innocence of summer camp, Lesage opens the story, rather than closes it, inviting audiences to recognize the stories of young love yet to be told. It’s nice to leave the theatre feeling hopeful for the next generation.

Genesis screens at TIFF Lightbox as part of Canada’s Top Ten until March 28.