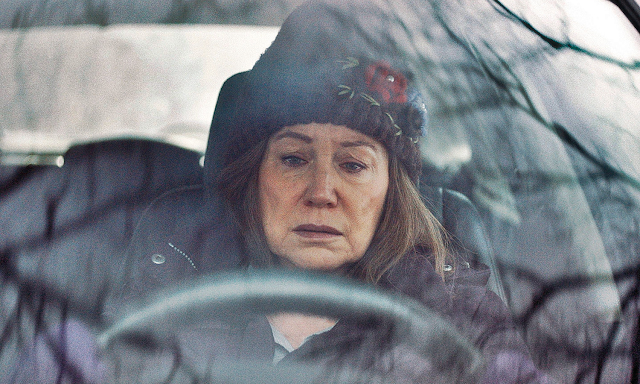 Diane might not be the best film to see with your mom on Mother’s Day. Sure, it’s a well-intentioned portrait of a devoted mother who indefatigably does all she can for her son and family, but it’s a bleak reminder that your mom will soon be buried under flowers rather than receiving them. Film critic turned director Kent Jones (Hitchcock/Truffaut) makes his feature dramatic debut with Diane and while he scores a respectable performance from Mary Kay Place, his film is a lethargic misfire. One depressing scene follows another while tinkling piano music strains on the soundtrack and Place sits sullenly with a beleaguered look on her face. The film’s existential questions ultimately inspire one to sit up in the movie theatre and wonder, “Why am I here?”

Diane (Place) approaches the final stage of her life as her retirement days become a series of hospital visits, sad lunches, funerals, and thankless parenting. Jones thrusts his heroine into a monotonous cycle of scenes as Diane encounters death and illness day in and day out. She goes to the hospital to visit her cousin with cervical cancer (Deirdre O’Connell) in between check-ins with ailing relatives, drop offs of casserole dishes to housebound friends and family, and well-to-do volunteer shifts at the local soup kitchen. She also does daily check-ins on her drug-addict son (Jake Lacy) and knows it’s probably just a matter of time before she finds him OD’d on the couch. The only brief reprieves Diane enjoys from her exhausting and joyless existence are the meals she shares with her friend Bobbie (Andrea Martin, offering the film’s few rays of sunlight) in which they complain over cheap food.

Place gives a thoughtful and introspective performance in the title role. She carries virtually every frame of Diane and brings to life the existential longing that Jones seeks to convey with the film’s repetition of hopelessly bleak scenes that soldier on towards a parade of funerals. Diane’s ongoing encounters with death inspire her to confront her own mortality. It eventually becomes apparent that her selfless devotion is actually self-serving, since she spends time with friends and family as acts of atonement. Place delicately conveys Diane’s exhaustion with life and the great burden of guilt she carries. Jones reportedly wrote the part specifically for Place and it shows in both her performance and the film overall, but Diane leaves something to be desired as the film isn’t nearly as interesting as its protagonist is. Filmed mostly in dank interiors with muted aesthetic touches aside from that annoying piano music, Diane is frankly a bore that might have been better served as a play or short story.

Diane escapes her humdrum routine and tires to unburden herself by channelling her anxieties into poetry. Jones infrequently cuts to scenes of Diane as she picks up a notebook and writes about death and loneliness like a wannabe Emily Dickinson. The poems are not very good, but this comes as no surprise given that there’s nothing in Diane to indicate that the dowdy heroine has the mind of a poet.

As Diane becomes more poetic, so too does the film as Jones sporadically breaks from the listless style and pace that defines the first two thirds of the film. Diane surprises with some formally and thematically ambitious scenes, but their power is undercut by their sheer randomness. As the bodies pile up and Diane approaches her inevitable demise, Diane is an unpleasant reminder that life is cruel, pointless, and miserable. And then we die.