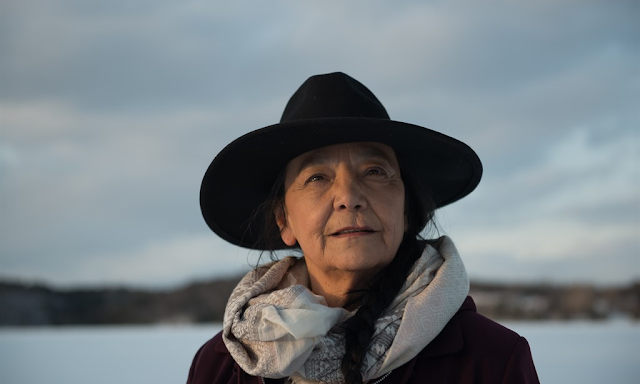 Tantoo Cardinal is one of Canada’s great character actors and she finally gets her due with Falls Around Her. She has over 100 credits to her name in a career that’s spanned forty years and featured an Oscar winner for Best Picture that remains one of the defining films of the 1990s. While Dances with Wolves remains the biggest entry of Cardinal’s résumé, too few of Cardinal’s roles have offered much by way of screen time or narrative arcs, but they’re always memorable highlights of the films in which she appears. It’s astounding that her performance as Mary in Falls Around Her is the first lead role of her career. It’s the cherry on top of a recent hot streak that includes small but notable roles in films like Wind River, Through Black Spruce, and The Grizzlies.


Cardinal plays Mary Birchbark, a successful Anishinaabe singer who decides to end her career on a high note and retire to her home in Atikameksheng Anishnawbek First Nation in northern Ontario. Writer/director Darlene Naponse doesn’t offer much in the way of a backstory or an explanation for Mary’s choice to call it quits, aside from a pissed off manager/beau (Rob Stewart), who is clearly shocked by the French exit that Mary performs after her final show. Everything’s written on Cardinal’s face, though. The actor’s pensive and weathered visage conveys how Mary has no regrets about her success, nor with her life, but she’s tired of the grind and the demands of the job that weigh one down so many years.

Much of Falls Around Her offers uncontrived slice of life observations of Mary rejuvenating in the day-to-day work around her cabin. The music by Julian Cote is mellow and evocative as it speaks to Mary’s search for peace. There are scenes of Mary readying her cabin, hiking in the woods, or simply enjoying the balmy sensation of the sun on her face as she looks up at the sky, seeing trees and sky instead of condos and buildings. Naponse creates a strong sense of place as Mary reconnects with her environment and the film subtly observes the reality of daily life in First Nations communities as the camera takes in the poverty of the homes and the prices of groceries that are ridiculously disproportionate with their freshness or quality. A few efforts to inject the film with current affairs, like a protest about a pipeline, are somewhat more contrived, but Mary’s overall journey speaks to another urgent concern.

It’s becomes apparent that Mary is not in retirement. She’s hiding. She’s running from something and Cardinal imbues her character with a heartfelt weariness that tells audiences that Mary has spent too much of her life looking over her shoulder. As she cautiously steps out into the community by spending time with her sister Betty (Tina Keeper, with whom Cardinal has great chemistry) and a prospective suitor/fellow performer named Albert (Jonny Issaluk), it’s hard to mistake the evasiveness of Mary’s demeanour. She’s always looking to get out.

As Mary’s concerns become frighteningly real, Falls Around Her sees the singer become empowered and her refuse to play the victim. Although the film sometimes struggles on its route to the climactic showdown between Mary and her aggressor, the limitations of the film itself illustrate how remarkably Cardinal can carry a story and deliver a range of depth and emotions. Cardinal delivers in every frame of Falls Around Her by creating a layered, soulful, and lived-in performance. It might be the first time her name’s been atop the credits, but it won’t be the last.

Falls Around Her is now on home video.